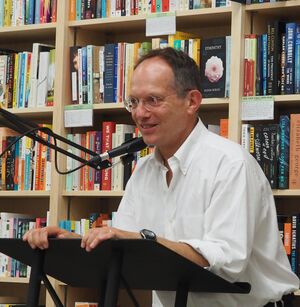 Don David "D. D." Guttenplan is an author, journalist, The Guardian contributor[1] and editor-in-chief of The Nation magazine, a position he has held since 2019.[2]

Guttenplan's writing career began in New York city politics and in publishing in 1980. He calls his proudest achievements of this time "drafting the bill to name a portion of Central Park "Strawberry Fields," commissioning a biography of the anarchist Emma Goldman, and the reissue of the WPA Guide to New York City."[3] During the 1980's, he also worked as the senior editor at the Village Voice.

Guttenplan worked as the London correspondent for The Nation before becoming the magazine's editor-in-chief. As of February 2019, he also served as the editor-in-chief for the U.K.-based magazine Jewish Quarterly.[4]

He has taught American History at University College and at Birkbeck College, and is a frequent commentator on American culture and politics on the BBC.[3]

Guttenplan produced the 2004 documentary Edward Said: The Last Interview, a conversation with his incurably ill friend and former teacher Edward Said, a Palestinian-American intellectual who was a professor at Columbia University.