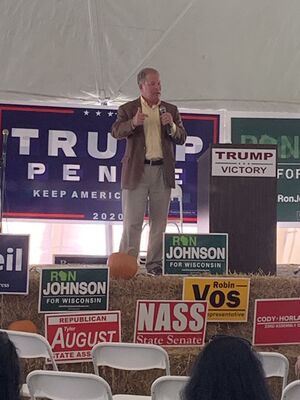 Daniel Kelly was appointed to the Wisconsin Supreme Court in 2016 by then-Governor Scott Walker.[1] Prior to joining the court, Kelley was General Counsel and Vice President at the Kern Family Foundation, a founding partner and commercial litigator at the Milwaukee law firm Rogahn Kelly, and a lawyer at the Reinhart Boerner Van Duren law firm.[2][3] On May 28, 2019, the Milwaukee Journal Sentinel reported that Kelly announced on a conservative talk radio show that he is seeking election for a ten year on the court.[4]

Kelly is deeply tied to Republicans and the Wisconsin right-wing infrastructure. In addition to his appointment by a Republican governor, he is the former president of the Milwaukee chapter of the Federalist Society for Law and Public Policy Studies, a member of the advisory panel for the Wisconsin Institute for Law & Liberty, has "praised two of the U.S. Supreme Court's conservative justice," and worked on the legal team that defended the 2011 Wisconsin gerrymander.[4]

ThinkProgress referred to Kelly as an "obscure lawyer with highly idiosyncratic views" when Walker appointed him to the court in part due to his statement that affirmative action and slavery "[m]orally, and as a matter of law [] are the same.”[5]

The Milwaukee Journal Sentinel reports that Kelly's views on same-sex marriage and affirmative action will likely play a role in the campaign. Brian Hagedorn has announced his "full support" for Kelly and is expected to join him on campaign stops.[4]

Wisconsin Right to Life, a group that wants to criminalize abortion in Wisconsin, announced that it is endorsing Kelly.[6]

"This is not the first time the extremists at WRTL made a push to put Kelly on the state high court. In his 2016 application for appointment to the Supreme Court Kelly included a letter of recommendation from WRTL’s executive director in which she touted legal work he did for the organization as a private practice attorney," One Wisconsin Now noted.[6]

Kelly's Friends of Justice Daniel Kelly raised close to $800,000 in 2019, double his nearest challenger Dane County Judge Jill Karofsky who raised $348,602 in 2019, and over five times what Marquette University Law professor Ed Fallone brought in at $149,732, the Center for Media and Democracy (CMD) reported.[7]

"Billionaire Diane Hendricks of ABC Supply and her daughter Kim were the only two contributors to give $20,000 each to Kelly’s campaign in 2019, the maximum contribution allowed to a candidate for the state’s highest court in an election cycle. The CEO of Hendricks Holding Co., Brent Fox, also gave $10,000, bringing the total contributions from Hendricks’s inner circle to $50,000," CMD found.[7]

Trump endorsed Kelly at a campaign rally in Milwaukee on January 14, 2020, saying,

On his nomination papers to get himself on the 2020 ballot for State Supreme Court, Daniel Kelly's campaign listed the same address as the Republican Party of Wisconsin headquarters. "According to Kelly’s campaign, signature collectors are directed to return their forms to 148 E. Johnson Street in Madison. The address of the Republican Party of Wisconsin headquarters is also 148 E. Johnson St., an office building they own and occupy blocks from the State Capitol," One Wisconsin Now found.[9]

Daniel Kelly's "tenure on the court has definitively" showed that he is a "judicial extremist" according to One Wisconsin Now (OWN) Research Director Joanna Beilman-Dulin. OWN cites the following opinions from Kelly as "as examples of his extremism in action":[10]

OWN also says Kelly has "thrown out the appearance of impartiality, taking thousands of dollars in campaign contributions from board members of an organization while it was arguing the case before him and immediately after he joined in ruling in their favor."[10]

At a luncheon presented by the Pax Americana Institute, a conservative think tank, Kelly warned his audience to beware of judges looking to legislate from the bench.[11] One Wisconsin Now (OWN) Research Director Joanna Beilman-Dulin called Kelly's comments ironic, stating "Dan Kelly is warning Wisconsin to beware of him, based on his own actions on the bench.” OWN cited the Wisconsin Supreme Court decision to side with the Wisconsin Institute for Law & Liberty on the enforcement of the REINS Act. "The measure was nearly identical to the previously invalidated legislation" according to OWN. Kelly's colleague Justice Ann Walsh Bradley noted in her dissent that "nothing in our Constitution has changed" since the legislation was previously invalidated, "what has changed is the membership of the court. This time around, a new majority of this court does an about-face and now concludes that the substance of Act 57 is constitutional. To reach this conclusion, it throws the doctrine of stare decisis out the window.” Beilman-Dulin concluded, “Dan Kelly likes to speak and write grandiloquently about the imperilment of the judiciary by those he accuses of ‘legislating from the bench.’ In plain and straightforward language, legislating from the bench for the benefit of a right-wing political agenda is exactly what Dan Kelly has done.”[12]

Kelly joined the majority of Wisconsin Supreme Court Justices in "handing Republicans a victory in one of several legal fights over the laws." The court's "conservatives, Chief Justice Patience Roggensack and Justices Daniel Kelly and Annette Ziegler" rejected the request put forth by The League of Women Voters of Wisconsin, Black Leaders Organizing for Communities and Disability Rights Wisconsin to "declare all of the Legislature's December actions invalid, including the Senate's confirmation of 82 appointments made by GOP Gov. Scott Walker before he left office."[13] Previously, Dane County Circuit Judge Richard Niess ruled that “the [Wisconsin State] Legislature did not lawfully meet during its December 2018 ‘Extraordinary Session,'” therefore violating Article IV of the constitution.[14]