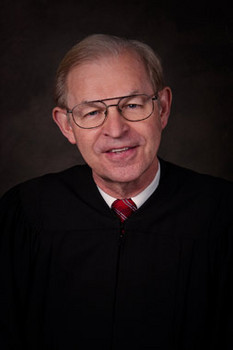 David T. Prosser, Jr. is a Justice on the Wisconsin Supreme Court.

Prosser was appointed to the Supreme Court by Governor Tommy G. Thompson in 1998. He was elected to a 10-year term in 2001 and reelected in 2011 after a contentious campaign.

Prosser faced JoAnne Kloppenburg, a relatively unknown Wisconsin assistant attorney general, in both the February 5, 2011 spring primary, and the April 5 run-off election. Wisconsin Supreme Court races are typically an easy win for the incumbent, but Kloppenburg's campaign was elevated by massive protests in response to Wisconsin GovernorScott Walker's controversial collective bargaining bill. For many voters, the officially non-partisan race turned into a referendum on Governor Walker and his bill. [1]

In December 2010 (two months before Governor Walker would introduce his collective bargaining plan), Prosser's campaign director expressed strong support for governor-elect Walker, saying Prosser's "personal ideology more closely mirrors" Walker's, and that a win by Prosser would result in, "protecting the conservative judicial majority and acting as a common sense compliment to both the new administration and Legislature." [2] Prosser later disavowed the statements and claimed he had not seen the release. [3] Prosser's campaign manager also said that, "This election is about a 4-3 commonsense conservative majority vs. a 3-4 liberal majority, and nothing more." [4]

Prosser later claimed that if he was defeated, it would mean the end of judicial independence. [5]

On March 31, a week before election day, Prosser's campaign co-chair, former Democratic governor Patrick Lucey, resigned from the campaign and endorsed Kloppenburg, saying it appeared that Prosser had lost his impartiality, and was showing "a disturbing distemper and lack of civility that does not bode well for the High Court". [6]

The Wausau Daily Herald reversed its primary election endorsement, and urged its readers to vote against Prosser in the general, describing him as "an intemperate figure given to partisan rhetoric". [7] Prosser was endorsed by the Sun Prairie Star, The Milwaukee Journal-Sentinel, and former Alaska governor Sarah Palin (via Twitter), among others for the general election. [8]

Nearly 1.5 million votes were cast on election day, exceeding expectations. [9] Kloppenburg was initially thought to be ahead by a razor-thin margin of 204-votes, leading her to declare victory. [9] The next day, Waukesha County Clerk Kathy Nickolaus, a Republican, announced that the preliminary vote totals she had given to the Associated Press on April 6 did not include 14,315 votes from Brookfield, her county's second largest city and one of the most Republican. The announcement changed the unofficial total, giving Prosser a lead of over 7,000 votes. [10]

Nickolaus was criticized for incompetency and mistakes in this and previous elections, and some saw a conspiracy because Nickolaus was a Republican in the most Republican district in the state, and had worked under Prosser when he was in the assembly. [11] Nate Silver of the New York Times looked at the numbers and announced the erroneous vote counts pointed to "incompetence, not conspiracy." [12]

Prosser wrote a lengthy concurrence that was criticized by dissenting justices and others for creating new facts not already in the court's record, and not supported by the public record. The case came to the Wisconsin Supreme Court not as an appeal of Judge Sumi's May 26 lower court decision striking down the collective bargaining bill, but as a review of her March 18 temporary order, where she halted the law's implementation before both sides had finished presenting their cases, and before the relevant factual record had been developed. Under these conditions, the Court had limited evidence upon which it could base its decision. [13]

For weeks, the court sat on the case, staying publicly silent about whether it would accept it, and listening only to preliminary arguments on whether the court should take the case. Assembly Speaker Jeff Fitzgerald forced a deadline on the court in June when he announced the legislature would pass the collective bargaining provisions as a budget amendment if the Justices did not act by Tuesday, June 14. Over the apparent objections of the court's three-person liberal minority, the four-person conservative majority decided to comply with Fitzgerald's deadline and issue an opinion without the benefit of a complete factual record or an opportunity to hold hearings.[13]

In March 2011, the Greater Wisconsin Committee started running a 30-second television ad recalling a case of sexual abuse by a priest against Wisconsin children in the 1970s. The ad accused Justice Prosser of failing to prosecute Father John Patrick Feeney in the late 1970s for sexually abusing brothers Todd and Troy Merryfield and of trying to prevent a scandal for the Catholic Church and the priest, who was related to a famous singer on the Lawrence Welk Show. In 2004, Feeney was convicted for assaulting the Merryfields. The ad criticizes Justice Prosser's decision not to pursue charges against Feeney when Prosser was a county District Attorney. Troy Merryfield, has previously complained about Prosser's failure to act but called the ad "offensive, inaccurate and out of context" and asked the group to remove the ad from the airwaves.[14][15][16]

While arguing over the question of whether another justice should be recused from hearing a particular criminal case, Justice Prosser exploded behind closed doors and called Wisconsin Chief Justice Shirley Abrahamson a "total bitch" and threatened to “destroy” her. The in-fighting came about in February 2011 according to interviews and e-mails between justices. Emails show that rivalry and discord among justices on the state's Supreme Court, problems that justices on both sides described the court as dysfunctional. Prosser suggested bringing in a third party for help; other other justices suggested that a third party would not be able to address what they described as Prosser's "tantrums.".[17][18] Prosser told the Milwaukee Journal Sentinel that the problems on the court were the fault of the Chief Justice Shirley Abrahamson, whom he said goaded her into calling her that pejorative term and the threats.

In June, 2011, Justice Prosser's colleague on the bench, Wisconsin Supreme Court Justice Ann Walsh Bradley, accused Prosser of choking her during a confrontation while the justices were discussing the merits of a lawsuit challenging Wisconsin Governor Scott Walker's contentious law stripping public workers of their collective bargaining rights. Six out of the seven justices observed the altercation. [19] The incident earned Justice Prosser the nickname, the "Madison Strangler."[20]

The WI Supreme Court is the only governing body that can make a final ruling on this issue. Additionally, the commission's special prosecutor, Franklyn Gimbel, said the justices (except Prosser and Bradley) must rule on the case even though 4 of the 5 remaining justices witnessed the incident.[21] However, Justices Roggensack, Gableman, and Ziegler subsequently recused themselves from the case. [22] [23] This caused the case to stall indefinitely due to lack of quorum (there were only 3 justices left to sit in on the case but 4 is required to establish quorum). [23] [24]

In a February 13, 2013 memorandum, Justice Bradley responded to Justice Prosser's Motion requesting she recuse herself from the misconduct case against him. [25] In addition to granting the request for recusal (as expected), she used the memo to express continued concerns over her safety, to speak about the court's dysfunction, and to publicly criticize some fellow Justices for their denial of said dysfunction, in particular, Justice Patience ("Pat") Roggensack who is up for reelection in 2013. [26] In her memo, Bradley claimed to be responding to continued public statements made by Roggensack in which Roggensack discounted the court's dysfunction calling it "just a bunch of gossip at its worst" and stated that the court was "doing just fine." [27][28] Bradley's memo instead claimed that she and the Chief Justice, Shirley Abrahamson, had requested additional security even before this incident due to concerns over Justice Prosser's erratic and abusive behavior. [26] [29]

The memo has been criticized by some as a political stunt due to its release just before the supreme court primary in which Roggensack ran for reelection. [30]

Justice Prosser was born in Chicago, Illinois, and raised in Appleton, Wisconsin. He received his bachelor's degree from DePauw University in 1965 and his law degree from the University of Wsiconsin Law School in 1968.

Prior to joining the Court, Justice Prosser served on the Wisconsin Tax Appeals Commission where he conducted hearings and issued decisions on disputes related to taxation in Wisconsin.

Before being elected to the state Assembly, Justice Prosser served as Outagamie County District Attorney.

He also worked in Washington, D.C., in the Nixon Administration for Deputy Attorney General Richard Kleindeinst in the Office of Criminal Justice for the DAG. He wrote testimony for Kleindeinst that was praised by Assistant Attorney General William Rehnquist, who was subsequently appointed to the Supreme Court by President Nixon. Kleindeinst eventually became Attorney General and then worked on Nixon's reelection campaign; he resigned shortly after the director of the FBI resigned as charges were leveled about interference in the Watergate investigation. Kleindeinst was later convicted for perjury for his testimony during his nomination hearing, regarding the decision to settle the ITT antitrust case, after which the company gave over a half million dollars to the effort to re-elect the president.

Prosser has not publicly detailed his work at the Justice Department with Kleindeinst and former Attorney General John Mitchell, who was also convicted, or John Dean, who resigned as White House Counsel and had previously worked in the Office of Criminal Justice. It is not clear what projects Prosser worked or speeches and testimony he wrote for the top leadership of the Nixon Justice Department during alms the entire first term of that administration. During that period, Rehnquist and other leaders were examining how to use criminal law and martial law to disrupt American protests against military operations in SouthEast Asia; the Justice Department was considering charges against Daniel Ellsberg and the New York Times for the publication of the Pentagon Papers; the Department was defending the Nixon Administration in its assertion of a national security exception to the Fourth Amendments criminal wiretap provisions; and the administration was considering how to deal with violence surrounding school integration. It is not clear what, if any role, Prosser played in any discussion of these matters in his work in the senior management offices of the Nixon Justice Department. It is also not clear when he left the Department. It appears his tenure in the leadership offices extended past the Saturday Night Massacre in which Robert Bork fired the independent prosecutor investigating Watergate for requesting the tapes from the Nixon White House, and several political appointees resigned rather than fire the investigator.

Sometime in 1973, Prosser became an advisor to U.S. Rep. Harold Froehlich (R-Wisconsin), a member of the House Judiciary Committee during the Watergate impeachment inquiry. Froelich voted for two of the three impeachment counts against Nixon (related to the Watergate break-in and spying on opponents) but not for the count related to Nixon's refusal to comply with a subpoena to the White House, which had claimed unlimited executive power to refuse to cooperate. It is not clear what Prosser's views were of the impeachment counts against the President he formerly served for.