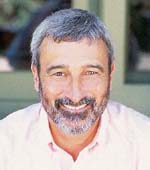 Don Burke was the presenter of the now defunct television show Burke’s Backyard but remains the producer of the program Backyard Blitz, which advises on how homeowners can makeover their gardens. Between July 2005 and September 2008 he was the chairman of the Institute of Public Affairs front group, the Australian Environment Foundation.[1][2]

In October 2008, the Tasmanian headquartered logging company Gunns announced that Burke had been appointed as "Environmental Advise" to the company board.[3]

Burke with the AEF

"The reason is that the moment (they) succeeded in changing the attitudes of the world, they became obsolete . . . You can't stop the world changing . . . The challenge is to work out how we can adapt to change," he said.[4]

In October 2008 Gunns announced that Burke "will act as a special environmental advisor to the Gunns Limited Board" and that he would "advise the Gunns Board on maintaining the best environmental outcomes across the Group, including ensuring the proposed Bell Bay pulp mill will not adversely affect the environment." The media release cited Burke as stating that "there is much more to be gained from working with companies such as Gunns to lead in good environmental practice than there is to protest against them".[5]

His decision to work for the logging company was criticised by former presenter of ABC TV's Gardening Australia, Peter Cundall. "If someone decided to put a giant pulp mill right near where he lives he'd be alongside me and I alongside him opposing it. What they're asking Don to do is to come here to the people of Tasmania from another place and tell us what he thinks should be done, and it won't work. I think Gunns are desperate for some kind of friendly publicity, so it's natural that they'll attract someone to use who's sympathetic to the mill," he said.[6] In response Burke said that "if Gunns came to me and wanted to build it next door I'd have it." However, The Australian reported that in 2001 Burke and "16 of their neighbours lost a legal battle in the NSW Land and Environment Court to overturn the local council's approval of a broiler farm application by Reno and Mary Camilleri".[7]

Despite the claim that he was against old growth logging[8] Burke will now become the main front person for Gunns Ltd's pulp mill project, one of the largest pulp mills in the world. The mill will source the majority of its trees from public owned state forest, which includes many old growth areas.[9]

Interviews with and articles By Burke