Edelman, the world's largest privately owned PR firm, was hired in 2008 to advise E.ON UK on how to handle growing opposition to its plans to build the Kingsnorth Power Station, which would be the first new coal-fired power station in the UK for several decades.

In February 2008 PR Week reported that "E.ON is calling in PR support as it gears up for a David versus Goliath battle with environmental campaigners over a controversial new power station." Writing in PR Week, Clare O'Connor noted that the brief would include crisis communications.[1] The electricity utility's quest for PR support followed documents obtained by Greenpeace UK revealed company's determination to get the government's approval for a new coal-fired power station.[2]

The documents, which were obtained under the Freedom of Information Act, Greenpeace reported, included one in which E.ON insisted that John Hutton "has no right to withhold approval" of the proposed new coal plant. "E.on also tells the government not to include carbon capture and storage in their conditions for building the new coal plant. It took the government just six minutes to reply: 'Thanks. I won’t include.” Just like that ... In the same email, E.on admits that carbon capture doesn’t exist (or, in their words, it 'has no current reference for viability at any scale'), exposing the government’s energy policy and E.on's media strategy – based on a faith in the potential of carbon capture technology to deliver 'clean coal' – as hollow."[2]

The following month, PR Week reported that E.ON had hired the PR firm Edelman "as the energy giant looks to develop its nuclear portfolio and counter opposition from green campaigners." E.ON UK's head of PR, Jonathan Smith, told PR Week that "Edelman will offer us support lobbying the Government and political audiences ... It will also carry out an information programme, getting the message across about the urgency to replace generation capacity. We also have plans for new nuclear stations. Edelman will be involved in work for the upcoming white papers."[3] 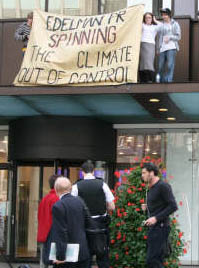 In July 2008, Oxford Climate Action protested against Edelman's role with E.ON UK and its role in helping defend the company's proposal for the Kingsnorth power station. Several activists climbed onto the awning at the front of the PR firm's office and unfurled a banner stating "Edelman: Spinning The Climate Out Of Control", while others went into the office. "We're here to reclaim the PR machine for normal people who want to see real action on climate change not another dose of corporate greenwash," protest spokeswoman Debbie Locke said in a media statement.[4]

The protest co-incided with the opening of a "Climate Change Summitt" organised by the Guardian newspaper and sponsored by E.ON UK. The theme of the conference was "Fighting climate change fatigue: how to keep stakeholders engaged". One of the speakers at the conference was Bob Taylor, E.ON's Managing Director Generation.[5] The outline of Taylor's speech included in the conference program stated "in this session we will discuss the role of energy companies in finding effective ways to deliver the transition to secure, affordable and low carbon energy. We will debate some established truths and consider the different options that will help us reach a common goal.".[6]

The Guardian's conference with E.ON's starring role prompted a protest from the Greenwash Guerrillas. In a flyer advertising a protest ahead of the conference they described E.ON's sponsorship of a conference on "how to keep stakeholders engaged" as being "greenwash of the highest toxicity: a laughable-if-it-weren’t-so-tragic attempt to distract us from the fact that E.ON are planning to build the first coal-fired power station in the UK for over thirty years."[7]

Amanda Andrews, writing in The Times, noted that "The Guardian found itself in an embarrassing situation yesterday as climate change protesters hijacked the paper’s Climate Change Conference" and that they "managed to steal the limelight" at the conference."[8]