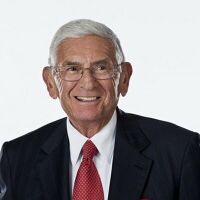 Eli Broad "is a renowned business leader who built two Fortune 500 companies from the ground up over a five-decade career in business. He is founder-chairman of both SunAmerica Inc. and KB Home (formerly Kaufman and Broad Home Corporation).

"Today, he is focused on philanthropy...

Avid supporters of contemporary art, Mr. Broad and his wife, Edythe, have created one of the world's finest collections. Since 1984, The Broad Art Foundation has operated an active "lending library" of its extensive collection to more than 400 museums and university galleries worldwide. ...

"In 1999, the Broads founded The Broad Education Foundation, whose mission is to dramatically improve urban public education through better governance, management, labor relations and competition. In its first five years, the Foundation committed over $500 million to support new ideas and innovative leadership in the nation's largest urban school systems. The Foundation also has launched three national flagship initiatives - The Broad Prize for Urban Education, The Broad Institute for School Boards, and The Broad Center for the Management of School Systems, which includes The Broad Superintendents Academy and The Broad Residency in Urban Education. Mr. Broad has said, "I can imagine no more important contribution to our country's future than a long-term commitment to improving urban K-12 public schools."

"In 2001, The Eli and Edythe L. Broad Foundation created the Broad Medical Research Program, which seeks to stimulate innovative research that will lead to progress in the prevention, therapy or understanding of inflammatory bowel disease.

"In June 2003, in an unprecedented partnership with the Massachusetts Institute of Technology, Harvard University and Whitehead Institute, the Broads announced the founding gift to create The Eli and Edythe Broad Institute for biomedical research. The Institute's aim is to realize the promise of the human genome to revolutionize clinical medicine and to make knowledge freely available to scientists around the world. ...

"In 1996, he and Mayor Richard Riordan took on the task of raising sufficient funds to build the Frank Gehry-designed Walt Disney Concert Hall, which opened to worldwide acclaim in October 2003.

"In 2004, Mr. Broad joined the Board of Regents of the Smithsonian Institution by appointment of the U.S. Congress and the President.

"Strong believers in higher education, the Broad Foundations have made a major contribution to the School of Arts and Architecture at UCLA toward the construction of The Edythe L. and Eli Broad Art Center, designed by Richard Meier. Mr. Broad is a senior member of the board of trustees of Caltech, where the Broads created the Broad Fellows Program in Brain Circuitry and gave the cornerstone gift to create the Broad Center for the Biological Sciences, which was designed by James Freed. Most recently, the Keck School of Medicine at the University of Southern California announced the creation of the Broad Institute for Integrative Biology and Stem Cell Research. Mr. Broad also served as chairman of the board of trustees of Pitzer College and vice chairman of the board of trustees of the California State University system." [1]

He also serves on the advisory board of the Children's Scholarship Fund.