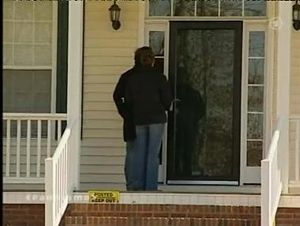 A reporter from German TV tries to talk to Eric Hume at his home in Johnston County, North Carolina

The offences are alleged to have been committed as part of the CIA's extraordinary rendition program. According to German magazine Der Spiegel, "El-Masri says he was wrongly abducted on New Year's Eve 2003 in Macedonia and detained in various secret overseas prisons often referred to as 'black sites.' His five month ordeal finally ended when he was dumped on an abandoned road in Albania."[2]

Fain appears to have first been identified publicly as Hume by the German association of investigative reporters, netzwerk recherche, in the proceedings of its 2007 annual conference. According to a report in the proceedings, he was identified by investigator John Goetz because of a phone call he made home when the El-Masri rendition team were forced to stay an unscheduled extra night in a luxury hotel in Majorca (machine translation by AltaVista):

"Eric Hume, which was probably called with the CIA Eric Fain, discovered Goetz with a search in the American directory. Whitepages.com. Because Fain from the hotel on Mallor had called approx. a number in the USA. Two days had stuck there the CIA people mark on the island in the Mediterranean. Because of a snowstorm. Hume, a fluke."[3]

"Fairing's copilot, who registered as Eric Matthew Fain, reached for the phone in his room and called a woman back home with whom he owns a 22-foot speedboat and who also flies missions for the CIA."[1]

"...is a bearded man of 35 who lives with his father and two dogs in a separate subdivision."[1]

Public records available for Eric R. Hume give his date of birth as September 1971, which agrees with the above age.[4]

A search of FAA records shows that both Eric Robert Hume and Eric Matthew Fain have identical medical results (medical class second, must wear corrective lenses), identical ratings and identical type ratings. Furthermore, both identities are subject to an identical restriction on operating the BE-300 type. Both Hume and Fain are also qualified as ground instructors, again with identical medical results and ratings. The only point of discrepancy is that Hume has a flight instructor's licence, whereas Fain does not.[5][6]

Reporter John Goetz from German television's Panorama program visited Hume's home in fall 2006. Here's what happened, according to a German-language transcript published on the program's website:[7]

Panorama tried knocking on Hume's door again in spring 2007. This time, a sheriff's deputy quickly showed up and warned the reporters off. The incident is available to view on the NDR television website.[8] If you can't understand German, this machine-translated transcript is clear enough to allow you to follow the report.[9] Although the report does not identify Hume by name, it is clearly his house as the video contains footage of his mailbox with his street number on it. It is the same as Hume's street number in his FAA records.[5] The video features the sheriff's deputy saying:

"You can't stay here... You've parked the vehicle in front of their house... We haven't received any type of warrant in our county."

It also shows that Hume has placed prominent "No trespassing" signs around his home.