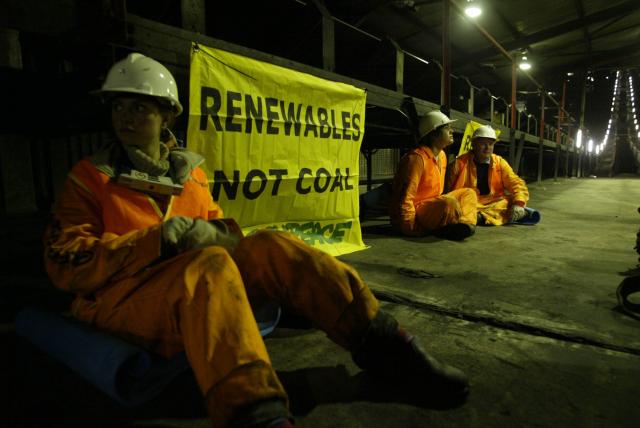 At dawn on July 3, 2008, 27 Greenpeace activists called for an energy revolution by taking peaceful direct action to stop climate-changing coal from being burnt at Australia's most polluting coal-fired power station, Eraring, in NSW. Activists, including an ex-miner from the Hunter, blockaded the coal supply to the plant by locking on to the coal conveyors. As the government's climate change advisor Professor Ross Garnaut prepared to deliver his Draft Review in Canberra on July 4th, Greenpeace said urgent action on climate change means Prime Minister Kevin Rudd must deliver policies that upscale renewables so that we can immediately start replacing old and dirty coal-fired power. Eraring, an old and inefficient plant, is one of eight coal-fired power stations in NSW. These plants are responsible for half the state's and 13% of Australia's greenhouse pollution. Eraring sends nearly 20 million tonnes of greenhouse pollution into the atmosphere every year. Each hour the coal supply is blockaded, prevents 2,000 tonnes of CO2 being released.

There are no pages that use this file.