Freedom Partner Shared Services(formerly Center for Shared Services) is a 501(c)(4) nonprofit that provides administrative support, human resources, and recruitment services for Koch-funded entities. Freedom Partners Shared Services's website describes its mission as to "promote a freer and more prosperous society by providing job opportunities with our network organizations and empowering their employees to make a difference."[1]

Politico describes FPSS as "a nonprofit recruiter and administrative support team for other Koch-backed groups, which provides assistance with everything from scouting office space to accounting to furniture and security."[2] Job openings listed on the FPSS job board in February 2016 included positions at i360, Generation Opportunity, The Libre Initiative, Freedom Partners, Concerned Veterans for America, Cause of Action, all Koch entities. 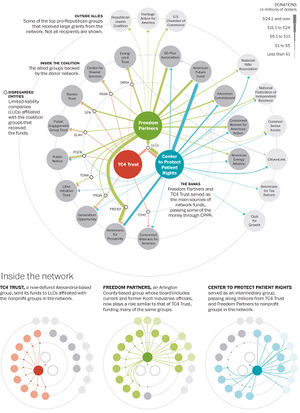 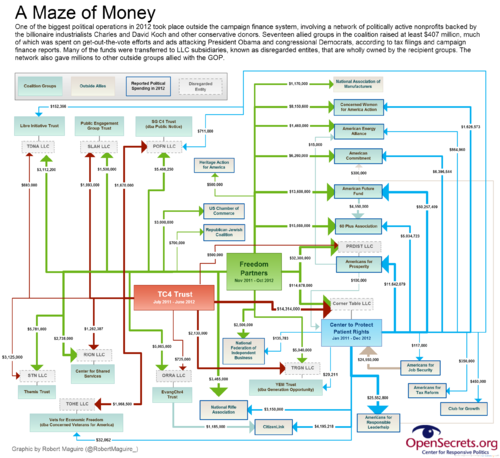 According to the Washington Post and based on reporting by the Center for Responsive Politics, Freedom Partners Shared Services (then Center for Shared Services) is part of "a coalition of allied conservative groups active in the 2012 elections that together raised at least $407 million, backed by a donor network organized by the industrialists Charles and David Koch."[3] Between 2010 and 2012, the FPSS received $2.7 million from Freedom Partners Chamber of Commerce and another $1.2 million from the Koch-linked TC4 Trust.[4] Freedom Partners gave FPSS $10,405,000 in 2013 and $9,750,000 in 2014.[5][6][7]

The Center for Shared Services (now Freedom Partners Shared Services) was reported to be in attendance at the June 2014 Koch network summit meeting.[8]

FPSS does not list its staff or board on its website. Its 2014 tax filings included the following personnel:[7]