Geoffrey C. Bible was an Australian-born President & Chief Executive Officer (CEO) of Philip Morris from 1997-2002, and was Managing Director circa 1983. He is currently a patron of the American Australian Association. 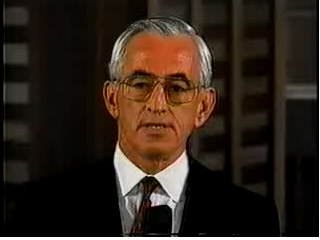 Geoffrey Bible was born circa 1938 in Australia and became an accountant. He first joined Philip Morris as a finance manager in Europe in 1968. Bible left Philip Morris to spend several years in the Geneva office of Ralph W. King Yuill, an Australian stock brokerage, and returned to PM in 1976.(USAT 6/21/94) In 1980s, Mr. Bible was Managing Director of Philip Morris Australia. He served as President and Chief Executive Officer of Philip Morris 1997-02, CEO and Chairman of the Board of Philip Morris circa 2000. He replaced CEO Michael Miles, who resigned in 1994.

Mr. Bible was set to retire in August 2002 when he turned 65. As of March, 1995 Mr. Bible was President, Chairman of the Board and CEO of Philip Morris Companies, Inc.

Around April 1993 Bible was named to the newly-created post of Executive Vice President, Worldwide Tobacco, which made him in charge of the company's $12 billion domestic tobacco business.(WSJ 4/20/93).

While testifying in Florida's lawsuit against the tobacco industry in 1997, Mr. Bible admitted that cigarettes were addictive and "might have" killed more than 100,000 smokers. He also said under oath that when scientists prove that cigarettes caused lung cancer, he would order the company's plants to stop production immediately. Following are the key portions of Mr. Bible's testimony:

Mr. Motley [plaintiff's attorney]: Would Philip Morris agree that a single American citizen who smoked their products for 30 or more years has ever died of a disease caused in part by smoking cigarettes?

Mr. Bible: I think there's a fair chance that one would have, yes. Might have.

Mr. Motley: How about a thousand?

Asked what he would do with his manufacturing plants if scientists proved "that cigarettes were a cause of lung cancer," Mr. Bible said he would "shut it down instantly." [1]