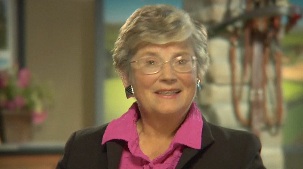 Helen E. Krieble is the founder and president of The Vernon K. Krieble Foundation, named for Vernon Krieble, who, together with his son, Robert Krieble, created an anaerobic polymer that seals metal parts to avoid vibration and leakage and prevent loosening of nuts and bolts. Vernon and Robert Kreible (also a chemist) founded the Loctite Corporation to market the sealant. Krieble also invented Superglue. Helen Krieble is heir to the fortune of the Loctite Corporation.[1]

Her father was the late Robert H. Krieble.

Helen Krieble advocates a plan to address immigration problems that she calls "The Krieble Plan," or the "Red Card Solution." The Red Card Solution essentially outsources immigration issues to private companies. The plan would allow foreign workers to apply for jobs in the U.S. through a private agency. Once hired, immigrants would be issued a credit card-sized identification card that stores the worker’s biometric data. The plan allows foreigners to legally come to the U.S. for specific jobs and for a specific period of time, but does not provide a way for them to become citizens. The Krieble Plan involves having private employment agencies open offices in foreign countries and issue non-citizen worker permits and conduct detailed background checks of workers. The program would be paid for by application fees and businesses that want to hire foreign workers.[2]