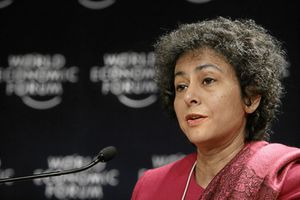 Irene Khan was born in Dhaka (now capital of Bangladesh, but then in East Pakistan) in 1957, into a relatively wealthy family; her father was a doctor and her grandfather was a lawyer who had gone to England at the age of 14 and studied law at Cambridge University before returning to what was then British India[citation needed].

Khan grew up East Pakistan and in Northern Ireland where she was sent in 1973 by her family to study for her A-levels. She says:

"I went from one civil war situation to another – it was pretty violent at that time in Northern Ireland. I went to a Roman Catholic boarding school in County Down and my sister went to the state-run school, which in those days was mainly Protestant, so the two of us have a rather different experience of Northern Ireland."[citation needed]

Khan studied law at the University of Manchester and Harvard Law School, specialising in public international law and human rights. Interested in working directly with people to change their lives, Khan helped to found the development organization, Concern Universal, in 1977, and began her work as a human rights activist with the International Commission of Jurists in 1979.

Khan joined the United Nations High Commissioner for Refugees in 1980, and worked in a variety of positions at Headquarters and in field operations to promote the international protection of refugees. From 1991-95 she was Senior Executive Officer to Mrs. Sadako Ogata, then UN High Commissioner for Refugees. She was appointed as the UNHCR Chief of Mission in India in 1995, the youngest UNHCR country representative at that time, and in 1998 headed the UNHCR Centre for Research and Documentation. She led the UNHCR team in Former Yugoslav Republic of Macedonia during the Kosovo crisis in 1999, and was appointed Deputy Director of International Protection later that year.

Khan joined Amnesty International as the organization's seventh Secretary General in August 2001. She was the first woman, the first Asian and the first Muslim to guide the world's largest human rights organization.

In her first year in office, Khan led high level missions to Pakistan during the bombing of Afghanistan, to Israel/Occupied Territories just after the Israeli occupation of Jenin, and to Colombia before the Presidential elections in May 2003. She called for better protection of women's human rights in meetings with President Musharraf of Pakistan, President Lahoud of Lebanon and Prime Minister Khaleda Zia of Bangladesh[citation needed]. She initiated a process of consultations with women activists to design a global campaign by Amnesty International against violence on women[citation needed].

Khan has been keen to draw attention to hidden human rights violations. In Australia, she drew attention to the plight of asylum seekers in detention. In Burundi, she met with victims of massacres and urged President Buyoya and other parties to the conflict to end the cycle of human rights abuse. In Bulgaria, she led a campaign to end discrimination of those suffering from mental disabilities.

She is the recipient of several academic awards, a Ford Foundation Fellowship, and the Pilkington "Woman of the Year" Award 2002.

Khan recieved £500,000 payment upon leaving AI.[1] AI has not adequately explained its largesse, which has generated resentment among local groups which are responsible for some fundraising[citation needed].