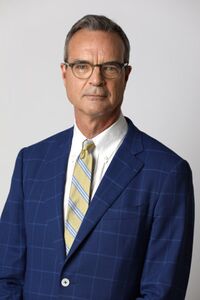 James Bennett Stewart is a staff writer at The New Yorker,[1] writer of the weekly "Common Sense" column at the New York Times,[2] the Bloomberg professor of business journalism at Columbia Journalism School,[3] and the author of several books, most recently Deep State: Trump, the FBI, and the Rule of Law.

While discussing his book Deep State: Trump, the FBI, and the Rule of Law in multiple interviews,[4][5] Stewart drew attention to Rod Rosenstein, the former Deputy Attorney General, calling him a "pivotal character".[4]

Stewart claimed that Rosenstein began his career as a independent prosecutor, but turned into "something of a lackey for the president, and for the new attorney general, William Barr."[4]About Rosenstein, Stewart said, "he rushed to judgment, he was quick to exonerate Trump, he mischaracterized the findings of the Mueller report, and he quickly left."[4]

Rosenstein was told to write a memo that justified the firing of Comey and was also told by Trump to give a press conference and offer the false statement that Comey had been fired for his handling of the Clinton email case.

Stewart also mentioned a "dramatic moment" in the book, where Rosenstein said there wasn't anyone he could trust at the White House other than James Comey, whose firing he had just helped cause.

In both interviews, Stewart pointed out that Rosenstein was so "completely unnerved" that he called for wiring the president and invoking the 25th amendment to remove Trump from office. Both interviewers challenged this point, saying it was denied and/or meant as a joke, but Stewart claimed "it's not a joke, as you can see in context" and said he was "amply persuaded it did happen"[5]

Stewart claimed that Bannon, McGann, and Sessions, other criticisms aside, at least knew the line between legal and illegal. He pointed out how all these figures, who had checked Trump's worst impulses, were now gone; now Trump has the people in place who will not stop him from doing whatever he wants.

Stewart also pointed out how the "No obstruction, no collusion" result of Russia investigation emboldened Trump to continue following his worst impulses. The result: Trump ended up giving Democrats exactly the missing piece of the puzzle they needed by telling a foreign country to investigate a political opponent in exchange for military aid.

Stewart highlighted how Trump blames "the Deep State" for all his failings and believed the intelligence community to be personally biased against him. Stewart argued that there is not a vast conspiracy against Trump as a person, it can instead be understood as retaliation for his firing Comey and then lying about it.