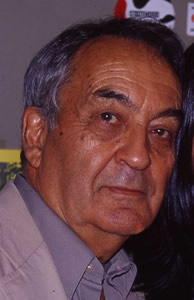 Jeff Blankfort is a radio program producer with KZYX in Mendocino. He is a journalist and Jewish-American and has been a pro-Palestinian human rights activist since 1970. He was formerly the editor of the Middle East Labor Bulletin and co-founder of the Labor Committee of the Middle East. He was also a founding member of the November 29 Coalition on Palestine and the Palestine Solidarity Committee. He won a settlement from the Jewish Anti-Defamation League (ADL) in February 2002 for its vast illegal spying against him, as well as hundreds of other progressive social, political, labor and environmental organizations and thousands of individuals (including anti-Apartheid groups/activists).

Blankfort's articles have appeared in CounterPunch, Dissident Voice, Mondoweiss, Pulse Media, Left Curve and the Encyclopedia of the Israeli-Palestinian Conflict.[1]

I consider Zionism to be a mental illness which makes otherwise decent folks behave like Nazis or Afrikaners. — 1 January 2006.[2]

Over the years Congress has been at the ready to give Israel additional funding, even when money has been unavailable for essential domestic programs, as happened in 2002 when the Senate, after defeating a bill that would have provided $150 million for inner-city schools that had been impacted by 9-11, turned around and tucked an additional $200 million for Israel into the Homeland Security Bill as if Israel had been targeted that day and not New York and Washington.[3]

A long list of Blankfort's articles, interviews, and commentary can be found here