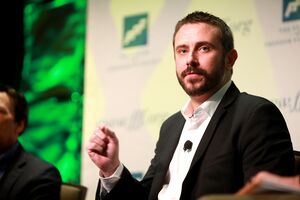 Jeremy Scahill is an investigative journalist, war correspondent, and author of several books about U.S. covert warfare and foreign policy.

After serving as the national security correspondent for The Nation until 2013,[1] Scahill co-founded the online media platform The Intercept in 2014 with investigative journalist Glenn Greenwald and filmmaker Laura Poitras,[2], where he now hosts the weekly Intercepted podcast, sponsored by First Look Media Works. Scahill is also a Democracy Now! correspondent. [3]

After learning he was scheduled to share a February 2017 Real Time with Bill Maher panel with alt-right provocateur Milo Yiannopoulos, Scahill withdrew from the show, saying "...debating Milo Yiannopoulos is many bridges too far... Appearing on Real Time will provide Yiannopoulos with a large, important platform to openly advocate his racist, anti-immigrant campaign... Yiannopoulos's appearance could also be used to incite violence against immigrants, transgender people, and others at a time when the Trump Administration is already seeking to formalize a war against some of the most vulnerable people in our society."[8] In his statements, Scahill also expressed mixed feelings about Maher's show, saying "I passionately disagree with– and find offensive– some of Bill's views, particularly when his comments on Islam and Muslims veer into vitriol. At the same time, I have deep respect for Bill... [he has] created a vital platform for debate and discussion that at times I love and other times loathe."[8]

Maher responded, saying "My comments on Islam have never veered into vitriol... Liberals will continue to lose elections as long as they follow the example of people like Mr. Scahill whose views veer into fantasy and away from bedrock liberal principles like equality of women, respect for minorities, separation of religion and state, and free speech. If Mr. Yiannopoulos is indeed the monster Scahill claims — and he might be — nothing could serve the liberal cause better than having him exposed on Friday night."[9]

In a February 2012 appearance on MSNBC, Scahill engaged in a heated discussion with Princeton professor Ann-Marie Slaughter, who had served as the director of policy planning in the Obama administration.[10] During the back-and-forth, Scahill stated, "U.S. counter-terrorism obsession with Yemen trumped concern for human rights", mentioning the fact that "USAID funding is a tiny portion of the military funding that the U.S. gives to Yemen", and saying "The U.S. was complicit in the violent crackdown of [former Yemeni President Ali Abdullah] Saleh's regime against the protesters because it did not cut him off when he started to be brutal."[11]

In a September 2012 roundtable discussion of Obama's foreign policy, Scahill sharply criticized Obama's actions, saying "The fact is, Democratic foreign policy is distinguishable from the Republicans' only insofar as the president took some of the worst aspects of the Bush-era foreign policy and pushed them forward." Scahill also criticized the subsequent media coverage of Obama's policies, saying "Many of the media discussions, including here on MSNBC, about foreign policy during the convention, felt like we were watching an Obama for America meet-up, not an actual serious critique of his [sic] most egregious aspects of his foreign policy."[12]

In another MSNBC appearance analyzing then-president Obama's May 2013 counter-terrorism speech, Scahill pointed out, "One of the things we have seen under President Obama is the expansion of what are called 'signature strikes', this idea that you're engaged in pre-crime like Minority Report where we are targeting people based on a pattern of life; we don't necessarily know their identities, we don't necessarily have any evidence or intelligence to suggest that they're involved with real terror plots or criminal activity aimed at the United States and we're preemptively just going in and killing them."[13]

Scahill also underscored Obama's constitutional law expertise, claiming "I think he's sort of trying to have it both ways. I think part of what we heard in that speech is what President Obama wants the truth to be or the reality to be and then part of it was a pretty forceful defense of the idea that the United States does believe it has the authority to conduct targeted killings, I would say 'assassination operations', in virtually any country where it perceives there's a threat to... U.S. persons."[13]

In 2010, Scahill talked about night raids and covert killings which led to radicalization.[14]

In 2007, Scahill talked about the privatization of the U.S. military and the rise of Blackwater.[15]

In 2013 Scahill's book Dirty Wars: The World Is a Battlefield was adapted into a documentary entitled Dirty Wars. The documentary begins with Scahill learning about a U.S.-led night raid which killed several innocent Afghanis, including two pregnant women. As Scahill digs deeper in an attempt to figure out who was responsible for this killing, he discovers the Joint Special Operations Command, a covert branch of the U.S. military which reports directly to the president. Throughout the documentary, Scahill travels from Afghanistan to Yemen and Somalia investigating the covert operations of the U.S. government's War on Terror.[16]

In a 2012 piece for The Nation, Scahill outlined Shaye's arrest and criticized President Obama for his role in interfering with his potential pardon.[19]

After Shaye's eventual release in 2013, Democracy Now! reported on his case, including an interview with Scahill, who raised questions about the legitimacy of Shaye's trial and conviction, saying "The White House is citing his conviction, that he supposedly was a supporter of al-Qaeda, in a kangaroo court, a court that was condemned by every major international media freedom organization, every major international human rights organization, that it was a total sham trial, where he was kept in a cage during the course of his prosecution and was convicted on trumped-up charges. So, Mr. Constitutional Law Professor President [Obama] is saying that this Yemeni court, that has been condemned by every international human rights organization in the world, is somehow legitimate."[20]

Another investigation in Dirty Wars follows the life of Yemeni-American Shia imam Anwar al-Awlaki. In the documentary, Scahill describes how al-Awlaki originally preached against terrorism after September 11, 2001 but radicalized as the Iraq War and the War on Terror progressed. After openly supporting violent jihad against the U.S., al-Awlaki was killed in a drone strike in 2011 without due process, marking the first and only known time a U.S. citizen was killed in a targeted drone assassination.[21] (Several U.S. citizens have been unintentionally killed by drone strikes.)[22]

Writing for the conservative publication the Washington Examiner, cultural critic and author Bruce Bawer claimed Scahill understated the danger of Islamic fundamentalism in Dirty Wars: The World Is a Battlefield, saying "Consistently, Scahill prettifies Islamic ideology and jurisprudence (quoting with a straight face the claim that Somalia’s Islamic Courts Union consisted of 'liberals, moderates and extremists' who shared only a determination to 'stabiliz[e] the country through Sharia law'). In Scahill’s lexicon, the terrorist group Al Shabab operates 'popular social programs' while the United States forms 'dark side forces' and wages 'twilight wars.'"[23]

Bawer also failed to understand Scahill's sympathy for Anwar al-Awlaki, arguing Scahill's book focused too much on the imam's victimization by the U.S. and not enough on his hand in inspiring jihadist violence: "Noting that [Al Qaeda's online propaganda publication] Inspire’s 2010 debut issue contained a 'Hit List' of artists who had caricatured the prophet, an article by Awlaki 'encouraging Muslims to attack those who defame the image of Muhammad,' and a piece entitled 'Make a Bomb in the Kitchen of Your Mom,' which explained how to construct an explosive device from a pressure cooker, Scahill acknowledges American intelligence concerns that such materials might 'incite young Western Muslims to commit "lone wolf" acts of terror'— although the only concern Scahill himself displays is over Awlaki’s continued well-being."[23]

A Publishers Weekly review of Blackwater: The Rise of the World's Most Powerful Mercenary Army offered an alternative view of Blackwater's success than described in the book, saying "Ultimately, Blackwater and its less familiar counterparts thrive not because of a neoconservative conspiracy against democracy, as Scahill claims, but because they provide relatively low-cost alternatives in high-budget environments and flexibility at a time when war is increasingly protean."[24]

Scahill and Amy Goodman produced the radio documentary Drilling and Killing: Chevron and Nigeria’s Oil Dictatorship,[25] which won a George Polk Award for radio reporting in 1999.[26]