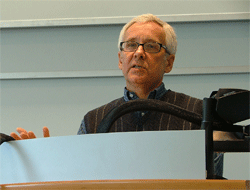 For decades, Lindheim used his expertise to help tobacco companies foster doubt and sow confusion among the public about the scientific consensus that secondhand tobacco smoke is harmful to nonsmokers.

In the 1970s Lindheim worked for Yankelovich, Skelly and White, a survey research firm that helped companies like DuPont, Monsanto, Exxon and General Motors with public relations and crisis management. From 1981 to 1995 Lindheim worked for the large, multinational public relations firm Burson Marstellar (BM); by 1987 Lindheim was an Executive Vice President of Burson Marstellar. [1] He eventually rose to become chairman of the firm. (see bio of Lindheim on page 4 of the document referred to in this link)

Starting in the mid-1970s, tobacco companies sought Lindheim's assistance with pressing problems like the declining social acceptability of smoking and public understanding that secondhand smoke can harm nonsmokers. [2] In 1988, R.J. Reynolds, Brown & Williamson and Philip Morris all sought Lindheim's assistance to protect and burnish their corporate images during pending smoking and health litigation.[3]

In 1988, while Lindheim was Executive Vice President at Burson Marstellar (BM), BM submitted a proposal to PM urging that,

Public relations efforts must be mounted [on behalf of PM] to articulate 'the other side' of the ETS [environmental tobacco smoke] issues in order to give decision-makers in governments and in business soundly based reasons to resist efforts to ban smoking...

Burson's major messages were that 1) existing scientific studies "in no way justify banning smoking on the basis of presumed ETS hazards to non-smokers," 2) that smoking bans would "create both problems and costs for a wide number of merchants," and that the solution in indoor air quality problems caused by tobacco smoke was "not to ban smoking (particularly since ETS has not been shown to be a health hazard) but to improve ventilation."[4]

In February 1989, Lindheim proposed Philip Morris (PM) take a "more aggressive assault" on secondhand smoke issues, to "make sure that our side gets a legitimate hearing." To advance this plan, Lindheim helped PM set up "smokers clubs" in Denmark and Sweden, distribute "news" favoring PM to European journalists, distribute PM-backed surveys and studies and conduct briefings with scientists who were recruited and screened by tobacco company lawyers.[5]

In May 1992, Lindheim proposed a multifaceted program aimed at reducing the declining social acceptability of smoking in Europe. The program entailed setting up a European news bureau to feed the media "positive" information about secondhand smoke science ("positive" meaning in the industry's favor), setting up "smokers rights groups" in European countries to act as third party "grassroots" advocacy groups, and worldwide distribution of a PM-backed study on airline air quality aimed at staving off smoking bans on airlines.[6]

In 1995, Lindheim contracted directly with Philip Morris, earning a monthly retainer of $30,000. [7] That same year, Lindheim proposed that PM advertise which airlines still allowed smoking and, in a memo to employees of PM's Corporate Affairs Department, wrote: "...If you want to be really mean, you could list the non-accommodating airlines prominently in the advertising as well (with a big no-smoking sign across their logos)."[8]

By 1996, Lindheim had opened his own consulting business called J. Lindheim and Company, and was still consulting for Philip Morris. In August of 1996 Lindheim drafted a "Public Relations Strategy for the United States" for PM in which he stated (in a section titled "Strategies Against the Enemies"):

Develop specific programs aimed at getting our opponents [public health advocates] off balance and ultimately showing them to be prohibitionists/greedy lawyers, i.e. people who should be marginal voices in the political spectrum...Make the prohibition possibility more real and tangible through articles, books, and visible portrayals of the slippery slope....Make our opponents interesting and ridiculous fodder for radio talk shows, columnists, TV talk shows...

By 2000, Lindheim was a self-employed consultant living in a remote area called Castle Valley in the desert of southern Utah, near Moab, and was still consulting for PM. [10] Internal PM emails indicate PM was still copying Lindheim on internal corporate information in 2003. [11][12].

A public list of political donors indicates Lindheim still lived in Castle Valley and was still acting as an independent consultant in 2004 [13] A 2004 web posting for Leeds Business School in Colorado shows that Lindheim gave a talk for the school's Center for Business and Society on 10/11/2004. Lindheim was described in the posting as a veteran "corporate social responsibility consultant."

In 2006 Lindheim purchased a condominium near a ski lift in the ski town of Telluride, Colorado.

Lindheim is mentioned in the Preface of the book Trust Us, We're Experts, by Sheldon Rampton and John Stauber. The authors write (on page 3):

...Burson-Marsteller's own experts in perception management believe that the public needs to be manipulated for its own good. James Lindheim, B-M's worldwide director of public affairs, offered an example of his reasoning in a speech to the British Society of Chemical Industry. The key, he said, lay in 'some very interesting psychological and sociological research on risk perception,' which 'suggests that the obvious, rational approach is not likely to succeed . . . In fact, the research tells us that people's perceptions of the sizes of various risks and the acceptability of these risks are based on emotional, and not rational, factors . . . All of this research is helpful in figuring out a strategy for the chemical industry and for its products. It suggests, for example, that a strategy based on logic and information is probably not going to succeed. We are in the realm of the illogical, the emotional, and we must respond with the tools that we have for managing the emotional aspects of the human psyche . . . The industry must be like the psychiatrist: rationally figuring out how it can help the public put things in perspective, but knowing that the dialogue can only begin with the trust on the public's side that says these people are taking my concerns seriously.