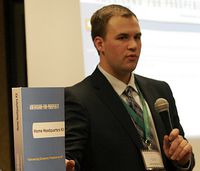 John Connors is a Republican operative and political consultant who has worked for Wisconsin Governor Scott Walker, David Koch's Americans for Prosperity (AFP), and the Franklin Center for Government and Public Integrity.

Connors was also titular President of Citizens for a Strong America (CSA), a front group that was active in the 2011-2012 Wisconsin recall elections, supporting Wisconsin Governor Scott Walker and Republican state Senators. CSA was bankrolled by Wisconsin Club for Growth, and both were subjects of a long-running John Doe investigation into potentially illegal campaign coordination between Wisconsin Governor Scott Walker's campaign and ostensibly independent groups.[1]

As of 2016, while Campaign Now! still listed a contact address in Brookfield, Wisconsin and claimed to be based in Milwaukee,[2] Connors appeared to be based in the Dallas/Ft. Worth area.[4]

Connors was a member of College Republicans and an activist with Americans for Prosperity as a college student at Marquette University in Milwaukee, Wisconsin. He was also an intern in Scott Walker's Milwaukee County Executive office, and according to his personal biography contributed to "the digital marketing launch" of Walker's 2010 gubernatorial campaign.[2]

Connors has been an activist with David Koch's Americans for Prosperity. He was listed as AFP's "Students for Prosperity Director" in 2008, was a featured speaker at the national AFP "Defending the Dream" Summit in 2009, was the "On-Site Production Coordinator" for the 2010 AFP Summit in Wisconsin, and helped former AFP-Wisconsin director Mark Block launch an updated AFP "home headquarters kit."[5][6][7]

Connors and organizations he was involved in, including Citizens for a Strong America, were targets of a long-running John Doe investigation into alleged campaign coordination between Scott Walker's campaign and other groups active in the recalls.[8]

President of Citizens for a Strong America, a Front Group Overseen by R.J. Johnson

Connors was President of Citizens for a Strong America, a mysterious group that first drew attention after an expensive ad buy in the 2011 Wisconsin Supreme Court race. CSA spent an estimated $1.7 million on the 2011-2012 recalls, according to the Wisconsin Democracy Campaign. Its expenditures included mailers as well as television and radio ads attacking Democratic candidates, and at least one television ad supporting a Republican candidate.[9] CSA also funneled money to other organizations that ran issue ads and participated in a controversial absentee ballot mailing in which the mailers listed the wrong date for elections (see [Funding Recipients].)

When it first became active, CSA listed no personnel on its website, giving only an address that turned out to be a UPS mail drop box in Beaver Dam, Wisconsin and a phone number that led to a full voicemail box. The Center for Media and Democracy uncovered that Connors had registered the group's web domain.[5] Later tax filings listed Connors as CSA's president.[10]

CSA turned out to be one of the shell groups entirely controlled by R.J. Johnson, the top advisor to both Wisconsin Governor Scott Walker's campaign and Wisconsin Club for Growth, which was later revealed to have bankrolled CSA and Connors' salary, providing $6.9 million of its total $7 million in revenue from 2010 to 2014.[11][12] CSA was subpoenaed in the John Doe investigation of Scott Walker and Wisconsin dark money groups.[13] CSA's listed treasurer, Valerie Johnson, is married to R.J. Johnson.[8]

Just weeks before the 2012 gubernatorial recall election, a previously-unknown independent expenditure group called Coalition for American Values Committee spent a huge sum -- $400,080 -- on highly influential ads attacking the premise of the recall and expressly calling for viewers to vote for Scott Walker.[14][15] One ad titled "Recall Madness" included individuals making statements such as, "Recall isn't the Wisconsin way," "I elected him [Walker] to do a job," "Let him serve it out," and ended with a clear express advocacy tag line: "End the recall madness. Vote for Scott Walker June 5." The ad's disclaimer read, "Paid for by Coalition for American Values, Brent Downs Treasurer. Not authorized by any candidate or candidate's agent or committee."[16]

Federal Election Commission filings from the related national Coalition for American Values PAC reported paying at least $77,519 to RJ Johnson's top lieutenant, John Connors' Campaign Now! strategy firm between January and December 2012.[17] CAV's lawyer, James D. Skyles, was previously Director of Operations and General Council for the Franklin Center[18][19] and was being paid as a contractor to the Franklin Center throughout the recall period (see below).

Express advocacy groups are required to disclose their funding sources, but CAV listed only its parent organization in disclosure statements filed with the Wisconsin Government Accountability Board.[20]

The Center for Media and Democracy later discovered through IRS filings that CAV's "primary source of funding in 2012 was the Center to Protect Patient Rights (CPPR), a conduit for $156 million in political spending raised by the Kochs and their network of funders."[21] (CMD, which publishes SourceWatch, filed a complaint with the GAB over this issue in 2014.)[20]

Furthermore, Coalition for American Values Action reported to the IRS that it engaged in no political activity in 2012. Both CAV and its primary funder, CPPR, were registered as 501(c)(4) social-welfare nonprofits.[22][23]

From 2009 to 2015, Connors was the Director of Special Projects at the Franklin Center for Government and Public Integrity,[4] a State Policy Network (SPN) "think tank" founded by WCFG director Eric O'Keefe. The Franklin Center's Wisconsin Reporter media outlet published more than 376 articles attacking the John Doe investigation, including critiquing articles about Connors and O'Keefe, without disclosing its ties to organizations and individuals involved in the investigation.[18]

According to tax filings, Connors' consulting firm, J. Connors and Co., was a top contractor for the Franklin Center from 2011 to 2014, along with the law firm of attorney James Skyles.