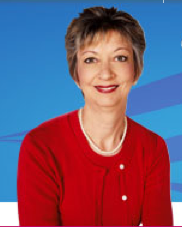 Laura Bradford is a Republican member of the Colorado House of Representatives from Colorado's District 55.

In November, 2007, energy company Xcel Energy announced that it planned to shut down the coal-fired Cameo Powerplant in western Colorado by the end of 2010, citing the older plant's inefficiency and the opportunity to reduce carbon emissions.[1]Bradford fought to keep the plant open. [2] Bradford said she believes that oil and gas drilling companies are "doing a good job in the development of our resources" in western Colorado, despite information about the health and environmental harms caused by fracking in western Colorado, including a feature-length, Emmy-winning documentary called "Split Estate" that specifically described the negative environmental and health effects of drilling and hydraulic fracturing in western Colorado.[3][4]

Bradford opposes a woman's right to seek an abortion, even when medically necessary for survival. Bradford supports the Personhood Amendment which seeks to alter the state's constitution to declare a fertilized human egg a human being, and assign fertilized human eggs all the rights and responsibilities of existing human beings. Bradford's website links to Personhood Colorado, the group that seeks to advance this measure nationally, [5][6]

Bradford opposes allowing gays to marry.[8] Bradford's self-promotional website, "Laura Bradford for Colorado," links to the website OneNewsNow.com, which contains a section called "Islam Watch" and posts articles with titles like "Love compels Christian fight against homosexuality"[9] and "Islam is on the Rise, Compliments of Obama."[10][11]