The pesticide DDT is subject to heated debate. On one side are environmental groups, headed by the World Wildlife Fund, pressing for a commitment to a date for a worldwide ban. On the other side are numerous libertarian think-tanks who oppose any controls on the substance. The centre ground is held by medical groups who favour a ban as soon as possible but urge caution in commiting to dates.

This article is concerned with the involvement of libertarian think-tanks in opposing a ban: why and how do such organisations, whose primary interest is the removal of regulation from business, come to champion this cause?

A critical examination of the involvement of these think-tanks does not necessarily imply that their arguments are wrong per se.

This article is work in progress. 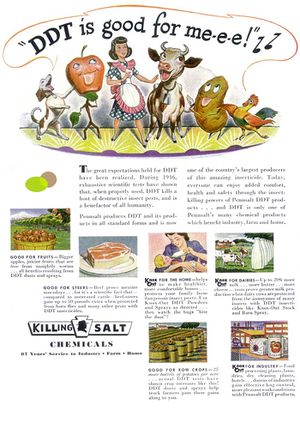 Overview of the issue

The use of DDT for controlling malaria is highly controversial: on the one hand, it has historically been effective at reducing mosquitos; on the other hand, it introduces a toxic agent into the food chain (harming wildlife in particular), and its overuse leads to DDT-resistant mosquitos. Therefore, DDT is tightly controlled in most countries, although it is widely agreed that its strategic use can play a part in the fight against malaria. The WHO position is that the use of DDT indoors (coating walls, for example), is acceptable.

Current international consensus is defined in the Stockholm Convention: that DDT use should eventually be eradicated but that effects on the prevalance of malaria due to its withdrawal should be closely monitored. However, countries are allowed several important exceptions regarding the control of DDT. These concessions were won after a highly active think-tank campaign running up to the decision reached in 2000.

In January 1999, the World Wildlife Fund started a campaign to lobby the UN to include in the Convention a target of banning DDT by 2007 [1]. This campaign, in turn, was subject to counter-lobbying by a malaria control organisation, the Malaria Foundation International, which argued that such a commitment would lead to unecessary deaths from malaria. Amir Attaran, a lawyer and academic who advocates free-market approaches to public health issues, used his Malaria Project as a lobbying arm of the Malaria Foundation, circulating amongst health professionals an open letter on the subject.

The cause of the Malaria Foundation was then taken up and vigorously promoted by radical free-market think-tanks. The main protagonists came from the Atlas Economic Research Foundation network, which appealed to the economic benefits of DDT use in controlling malaria. The first think-tank related activity was in 1999, when the Institute of Economic Affairs published a report by Richard Tren entitled The Economic Costs of Malaria in South Africa. This article argued that the use of DDT to control mosquitos in South Africa could save at least US$96 million (mostly through decreased absenteeism), and that a ban on DDT could cost the country US$480 million.

Shortly afterwards, Africa Fighting Malaria, a think-tank specifically aimed at lobbying against the WWF position, was set up by Richard Tren and Roger Bate.

The think tank activity was focused on preventing controls on DDT. These controls were to be decided by the UN Environmental Program by December 2000. The Malaria Foundation International considered their lobbying successful [2], as the final treaty described in the Stockholm Convention omits any commitment to a date for a ban.

However, the think tank network have continued to run with the story, including it as part of a developing Eco-Imperialism narrative, on the grounds that the West is hypocritically depriving developing countries of the right to use DDT.

Think-tanks which ran with the story include:

Other sources of pro-DDT pressure

South Africa is now the largest government promotor of DDT for mosquito control. It is frequently in dispute with Mozambique over the issue, as that country prefers a precautionary approach to the pesticide, and its borders with South Africa have a high incidence of malaria.

The mining industry in southern Africa is the largest private promotor of DDT spraying, as it is a highly cost-effective way of reducing absenteeism amongst the workforce. It is has the largest Gross Geographic Product of all industries in the country.