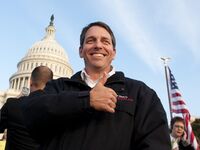 Named Among Defendants in Parler Lawsuit

In March 2021, John Matze, the founder of social media website Parler, alleged in a lawsuit that "wealthy philanthropist Rebekah Mercer, website associates Jeffrey Wernick and Mark Meckler, and podcaster and television analyst Dan Bongino conspired to steal his 40% company share, leaving him with $3." The lawsuit alleges that Mercer, who supplied the founding finances for the website, did not seek to "grow Parler as a free expression platform, but instead to redirect it into [the] ‘tip of the conservative spear’ for a brand of conservatism in keeping with Mercer’s preferences."[1]

After the January 6, 2021 capitol riots, the social media website Parler was banned from the app stores of Amazon, Apple, and Google. Parler relaunched in February 2021 with Meckler as its interim CEO.[2]

In leaked recordings of internal Parler meetings, Meckler called the company's leadership "warriors", saying "love it or not, you're all bound together in a fight... that is actually existential. Parler is a critical component in the fight to save, not just the country, frankly, not just the Constitution, but this concept of free speech is at the root of what it means to be free human beings. The ability to think freely and express yourself freely... this is a war, and you're in the war..."[3]

In a June 2020 video blog, Meckler said "Black Lives Matter as an organization is evil. It is anti-American, it is anti-nuclear family; they say this on their website. It is pro-transgender– it's a mental illness by the way, you can't be pro-mental illness– it's a terrible thing."[4]

Meckler also told viewers that there is a danger in labeling Antifa or BLM terrorist organizations because "most business insurance policies have an exception, in other words they don't cover terrorist incidents. And so that would mean if a business gets burned down and they've been declared a terrorist organization, no insurance coverage, so we've got to watch out for what we ask for."[5]

In April of 2020, Meckler's organization Convention of States Action helped coordinate protests against COVID-19 lockdowns.[7] COS launched the website Open The States which allows users to organize on online forums and petition state and federal officials. According to Politico, Meckler told viewers in a Convention of States Facebook livestream that "Facebook [is] literally working with the governors to find out what the policy is and they're trying to shut [us] down... So what we're trying to do is we're trying to create other ways to communicate with people about what we're doing."[8]

Meckler has written, "runaway courts do not provide the ‘rule of law,’ and they are not the ‘checks and balances’ our Founders envisioned."[9] He heads multiple organizations, including Convention of States Foundation, Convention of States Action, and CSG Action, that support an Article V convention to amend the U.S. Constitution and severely restrict federal power.[10][11] After 200 labor, environmental, civil rights and other organizations signed a letter opposing a Convention of the States, Meckler responded, saying "[In the letter] they actually said something truthful... They said, ‘This is intended to reverse 115 years of progressivism,’ and we say, ‘Yes, it is.’”[12]

As described by the Center for Media and Democracy, "[Meckler's] vision of constitutional revision is one in which states can defy Supreme Court rulings they believe stray from the Constitution’s original intent. The upshot is that, if a right-wing constitutional convention is held, voting rights, the Civil Rights Act, the Environmental Protection Agency, the federal minimum wage, abortion rights, marriage equality, and many other rights could be placed at risk."[10]

Meckler has claimed he does not "propose, support, or oppose, any particular amendments,” and that the Convention of States Foundation “doesn’t have a particular agenda.” As described by the Center for Media and Democracy, however, "a 2016 Convention of States mock convention passed amendments on the rightwing’s bucket list, such as easing the process to repeal federal regulations, requiring approval to increase the national debt, imposing congressional term limits, repealing the 16th Amendment’s authorization for an income tax, limiting the Commerce Clause, and requiring a supermajority to impose federal taxes."[10]

Center for Media and Democracy has highlighted Meckler's history of founding right-wing organizations. Meckler "co-founded the Tea Party Patriots in 2009, but resigned in 2012, two months after he was charged with a felony for attempting to board a plane with a semiautomatic handgun and ammunition... [Meckler] went on to found Citizens for Self-Governance (CSG), now the Convention of States Foundation, a right-wing nonprofit that manages the Convention of States project, with the Koch-connected Eric O’Keefe."[11]

As of September 2020, Mark Meckler was a "Gold Circle" member of the Council for National Policy.

In 2014, Center for Media and Democracy reported that the American Legislative Exchange Council "has published a 'how-to' manual for an Article V constitutional amendment, and at its last two meetings hosted workshops on amendment strategy from the group Citizens for Self Governance [now called Convention of States Foundation], led by Tea Party Patriots co-founder Mark Meckler..."[13]

Mark Meckler is from Northern California and organized the first Tea Party gathering in 2009 at the Sacramento state capitol.[16] He is registered as an independent voter.[14][16]