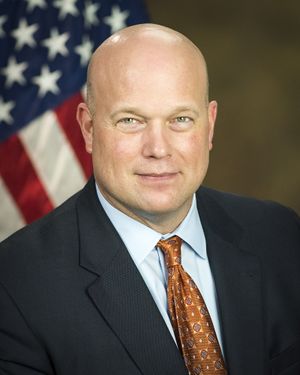 Matthew Whitaker was named acting US Attorney General in November of 2018 following Jeff Sessions's resignation at the request of President Donald Trump.[1]

Whitaker, who previously served as Session's chief of staff, was selected instead of deputy AG Rod Rosenstein, the No. 2 at the Department of Justice. Sessions had recused himself from the Special Counsel Russian election interference investigation, while Whitaker has been "a vocal and unabashed critic" of that probe.[2]

Prior to his time at the Department of Justice, Whitaker spent time as a college football player, Republican politician, lawyer, Former US Attorney, "Trump defender" on CNN[3] and executive director of The Foundation for Accountability & Civic Trust (FACT). Whitaker was paid $1.2 million for his time at FACT, "a sizable chunk" of the organization's revenue, much of which was from DonorsTrust according to the Associated Press.[4]

Time as Executive Director of FACT

Thirty percent of FACT's cumulative income between 2014 and 2017 went to Whitaker. In 2015, Whitaker's $252,000 salary was half of FACT's total revenue. His pay grew over his time there, increasing from $63,000 in 2014 to $502,000 in 2017. FACT's revenue -- and Whitaker's pay by association -- came "mainly" from DonorsTrust.[4] DonorsTrust is "donor-advised fund" that creates separate accounts for individual donors, and the donors then recommend disbursements from the accounts to different non-profits. They cloak the identity of the original mystery donors because the funds are then distributed in the name of the fund. DonorsTrust is associated with the Koch Brothers.

Whitaker sat on the advisory board of World Patent Marketing, a Florida-based marketing firm that claimed to help inventors navigate patents and sell their product. Reportedly, World Patent Marketing made $26 million as it “simply took cash without ever meeting or reviewing any pitches.”[3] Whitaker praised the organization, saying in a press release “As a former US Attorney, I would only align myself with a first-class organization.” He appeared on its website and was paid over nine thousand dollars to serve on the company's board.[5] The Federal Trade Commission forced World Patent Marketing to shut down and the Federal Bureau of Investigations is conducting a criminal investigation into the company for "scamming millions from customers during the period that Matthew Whitaker" served a paid advisory-board member.[5]

President Trump made Whitaker acting attorney general via the Vacancies Reform Act. Legal experts have questioned this move on constitutional and statutory bases.[3]