Michael Jordan is a former NBA basketball legend who has fought laws restricting indoor public smoking, who models and supports smoking behavior, and who breaks laws restricting smoking in specific locales. Jordan has been a headline celebrity at golf tournaments that are held to raise money for Lance Armstrong's Livestrong Global Cancer Campaign and the Livestrong Foundation, ostensibly to fight cancer.

In 1999, Michael Jordan owned a New York City restaurant in Grand Central Station, Michael Jordan's "The Steak House," that legally challenged that City's regulation prohibiting smoking in public buildings. City officials argued that according to the anti-smoking law, the bar in the restaurant was not small enough to be exempt, and that smoking was being allowed in too many spaces in the restaurant. Jordan sued, and the City lost the challenge.[2]

In an interview printed in VIBE magazine in 1997, Michael Jordan commented on endorsements he would not consider: "I would never do anything like Rogaine. I mean that's just hoping and wishing that I can get an Afro next week. Or, I wouldn't do cigarettes, cigars. I don't want to project something that's viewed negatively by a lot of people - but I love cigars . Shee-it, I'd smoke a cigar in a heartbeat. I smoke 'em, but I wouldn't endorse 'em. And condoms. I mean, even though everybody gotta use them. But they too small! They gotta get some bigger ones. I'd endorse the big ones." [3][4]

The City of San Francisco asked Michael Jordan to stop smoking cigars on a city-owned golf course after a photo of him appeared on the front page of the San Francisco Chronicle's "Sporting Green" section breaking the municipal ban on smoking on public golf courses. Jordan could face a $100 fine. [5][6]

In 1992, Jordan posed for the cover of Sports Illustrated magazine holding a cigar: 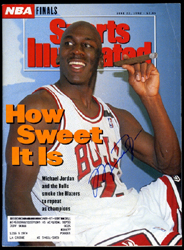 In April 2006, Jordan posed for the cover of Cigar Aficionado: 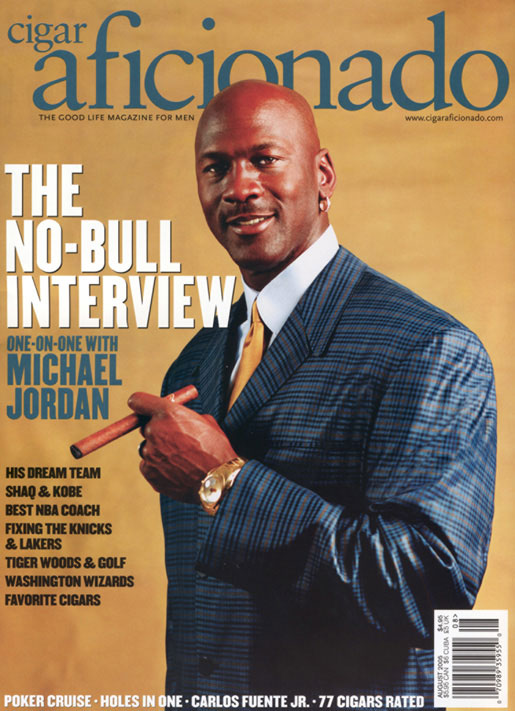