Michelle Rhee is an education reform advocate and former chancellor of Washington, D.C. public schools. She is the founder of StudentsFirst, a non-profit organization that lobbies on education issues such as school choice and ending teacher tenure. 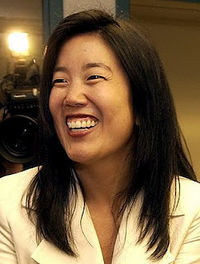 As chancellor of Washington D.C. public schools Michelle Rhee crusaded for education reform, most of which was aimed at teachers: ending teacher tenure and basing teacher evaluation on student test scores. Rhee fired more than 600 teachers for low test scores, 241 of them in one day in 2010.[1]

In 2013, a potential cheating scandal during Rhee’s first year as D.C. Schools Chancellor came to light. A confidential memo published by PBS reporter John Merrow, revealed that an outside data consultant to Rhee suggested that as many as 191 teachers in 70 schools had engaged in widespread cheating on the 2008 DC-CAS.[2] Teachers allegedly erased and corrected students’ wrong answers on this high-stakes standardized test.[3] Rhee has faced criticism for failing to investigate the erasures.[2]

Michelle Rhee resigned under pressure after three years as D.C. Schools Chancellor in October 2010.[4] She went on to found a new advocacy group, StudentsFirst, aimed at raising $1 billion to promote “transformative reform,” primarily by backing laws and political candidates at multiple levels, from local school boards to Congress.[4]