Oscar Auerbach, M.D. was a pathologist and the Senior Medical Investigator at the Veterans Administration (VA) Hospital in East Orange, New Jersey. Dr. Auerbach was responsible for several major studies that received widespread attention during the 1960s.

Dr. Auerbach was born in Manhattan and received his medical degree from New York Medical College in 1929. He worked briefly at Sea View Hospital, a city-run tuberculosis center on Staten Island. He worked at the Halloran Hospital, also on Staten Island, in the 1930's and 40's. From 1952 on, he held several positions at the Veterans Administration hospital in East Orange, New Jersey. He was eventually promoted to the position of Senior Medical Investigator, a title he held until his death in 1997. Mr. Auerbach also taught pathology at New York Medical College for 12 years. He shied away from the politics of cancer and smoking. According to Dr. Lawrence Garfinkel, a researcher and former Vice President of the American Cancer Society (ACS):

"He never got in the pulpit. He was never an activist. He was just a scientist and teacher."

Dr. Auerbach taught from 1966 until his death in 1997 at the age of 92, at the New Jersey Medical School, part of the University of Medicine and Dentistry of New Jersey. He lectured and trained residents at St. Barnabas Hospital and the University Hospital. [1]

Dr. Auerbach's study of the slides of damaged organs showed that a pack-a-day smoker was more likely to develop a range of lung damage than a light smoker. Increasing incidents of hyperplasia, stratification and changes in the nuclei of cells, directly corresponded with the heavier smoking. The heaviest smoking corresponded to the highest rate of lung cancer. Other studies revealed that the damage would begin to disappear in patients who quit smoking. According to Dr. Garfinkle:

"They actually healed themselves. They repaired the damage."

According to one study, by 1989, 25 years after the first Surgeon General's report on smoking, 750,000 lives had been saved due to people's decisions not to start smoking.

In Dr. Auerbach's studies on the link between cancer and tobacco, he studied thousands of slides of human tissue and coded each slide by clues to cell damage he found and whether the person had cancer or precancerous symptoms. According to Dr. Garfinkel:

One paper was based on 22,000 slides or approximately 50 slides from each patient. When they were first published in the 1960's, they were immediately debated. However, Dr. Auerbach's results had powerful long-term effects. After the Surgeon General's report, a major policy response was the requirement that cigarette packages to carry a health warning label. Along with the new label, an anti-smoking movement emerged in the 1970's. New regulations began to require non-smoking areas in public places. By using slides of individual patients, he convinced doctors that the cancer-smoking connection could not be discounted. Earlier studies had used large groups and found statistical links between cancer and smoking patterns.

When Dr. Auerbach took tobacco research beyond statistical studies, he found significant links between smoking and lung tissue damage. He also studied the effects of passive smoking or secondhand smoke. In correspondence, some written to Dr. Garfinkel, he revealed a direct relationship between the amount of smoke and the degree of lung damage.[2]

The American Cancer Society was an early promulgator of the link between smoking and cancer in the landmark epidemiological studies of 1952 and 1959. However, the tobacco industry was able to delay widespread acceptance of this link largely because animals in studies did not develop cancer. [3] Animal testing was used by politicians to avoid taking action against tobacco companies. Decades of vague and inconclusive results enabled them to perpetuate confusion and prevent doctors from giving authoritative warnings. Researchers spent decades forcing beagles to smoke cigarettes and painting tar on the backs of mice (although there were already clear links between tobacco and human cancer). Physicians were encouraged to keep quiet while researchers spent years performing animal tests. [4], [5] 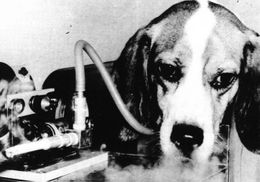 At one point, Dr. Auerbach "trained" 86 beagles to smoke in experiments where 12 developed cancer. It was said to be the first instance of tumors produced in large animals exposed to tobacco smoke. However, it is not clear why this particular study was given validity over previous studies in large (and small) animals, which failed to produce cancer. The American Cancer Society, which financed much of the research, announced that the results "effectively refute contentions by cigarette-manufacturing interests that there was no cigarette-cancer link." The response of the Tobacco Institute, an industry trade group, was that it was "impossible" to draw conclusions from work on dogs subject to such "stressful" laboratory conditions. [6]

Dr. Auerbach conducted experiments on beagle dogs from 1967 to 1970. The first experiment utilized twenty beagles, who were reportedly subjected to "debarking" (surgical removal of tissue from the vocal chords) to keep them quiet in the laboratory. The dogs were also given tracheotomies (surgical openings in their windpipes) into which tubes were inserted. Lab aides periodically placed a lit cigarette, without a filter, at the other end of the tube. The beagles were made to puff between six and 12 cigarettes per day, an amount experimenters judged to be the equivalent to smoking 1-2 packs/day in humans. A laboratory aide would attend each dog while they were smoking. Some of the dogs became addicted to nicotine. One displayed withdrawal symptoms when cigarette smoking was discontinued. Some of the dogs reportedly became so addicted to the administration that they wagged their tails and jumped into the smoking box (according to a report in a medical journal by the experimenters).

The experiments were financially supported by the VA and the ACS. The "smoking beagle" experiments continued for four years and were widely protested as animal cruelty. The National Catholic Society for Animal Welfare placed advertisements in newspapers throughout the U.S. protesting the experiments. The ads showed one of the beagles exhaling cigarette smoke while hooked up to a smoking machine. The caption said, "They cannot protest. They cannot escape. They are defenseless against the demands of science." The ads encouraged readers to contact their congressmen to ask them to stop the experiments and thousands responded. Dr. Auerbach defended the experiments, claiming that it would take 20 years worth of human studies to determine if filtered cigarettes were safe, as opposed to 18 months worth of dog experiments. Although he had already (along with many others) established a clear tobacco/smoking link through pathology and clinical studies, apparently, the focus of this particular study was to determine whether filtered cigarettes were "safe". It is not clear how such a notable difference in physiology (18 months as opposed to 20 years) would be an advantage, let alone valid and applicable to humans. Nor is it clear how severely mutilated beagles, subjected to not one, but two surgical procedures (often severely debilitating in themselves) smoking cigarettes through tubes inserted into tracheotomies, demonstrated this purportedly successful outcome. Never-the-less, according to the ACS, the results refuted contentions from tobacco interests that there were no cigarette-cancer links and claims to the contrary were only "statistical."[7]

Nineteen of the beagles died during the course of the first set of experiments involving 20 beagles. The remaining beagle was to be killed when the studies were concluded. [8], [9] See also Smoking beagles.

The tobacco industry predictably turned out all its big guns to attack Auerbach's dog experiments. However we now know that they were in favour of such experiments themselves in the early stages.

1967 Oct 12 Memo from Osdene to Helmut Wakeham giving details of a meeting in New York of the Council for Tobacco Research (CTR). The CTR Research Director, Robert Hockett, has outlined their activities and intentions.He intends to do biological testing with animals but he "has reservations on lung cancer in the human and correlation with skin-paining controversy, and is not interested in skin per se.

It was the skin-painting experiments of Ernst Wynder using smoke condensates which had implicated smoking as a probably cause of lung cancer in the first place.]

[Note the AEC (Atomic Energy Commission) was interested in the possibility that smoking transfered radioactive materials (carbon-14) to lungs, etc.][1]

Dr. Auerbach’s papers were donated to the University of Medicine & Dentistry of New Jersey. [10]