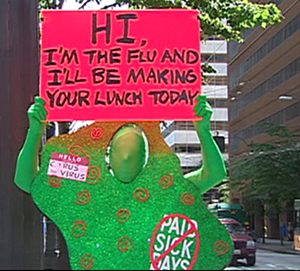 Paid sick days enable workers to take a minimum number of paid days off from their employer to recover from a routine or short-term illness or care for a sick family member without risking being fired or losing pay. Laws providing for paid sick days have been enacted in four states and at least 18 cities in the United States as of June 22, 2015, most of them passed since 2012.[1]

A coalition of corporate lobbying groups like the National Restaurant Association (NRA) have lobbied and campaigned against the expansion of paid sick days, and the American Legislative Exchange Council (ALEC) and ALEC politicians have played key roles in blocking local paid sick days laws by using a strategy of preemption that strips local governments of their authority to act.

This concerted effort to stop local laws they disagree with and strip local governments of their power is an organized national strategy promoted by ALEC and their corporate allies who find it more efficient to influence laws made in the state capital than to fight higher standards in city after city.[6][7]

A coalition of corporate lobbying groups including the National Federation of Independent Business, the National Restaurant Association, and the American Hotel and Lodging Association, which have long opposed paid sick days, recently started pushing preemption bills in many states.[8][9][10] The preemption strategy may be a "faster, cheaper alternative" to fighting ballot referenda, according to Mother Jones.[11] The Center for Media and Democracy, publisher of SourceWatch, exposed how this preemption strategy was discussed at a recent ALEC meeting in its article, "The ALEC-Backed War on Local Democracy."

Paid sick days should not be confused with family and medical leave, which generally does not include routine illness or preventive health appointments. See Paid Sick Days Laws in the United States for more information. 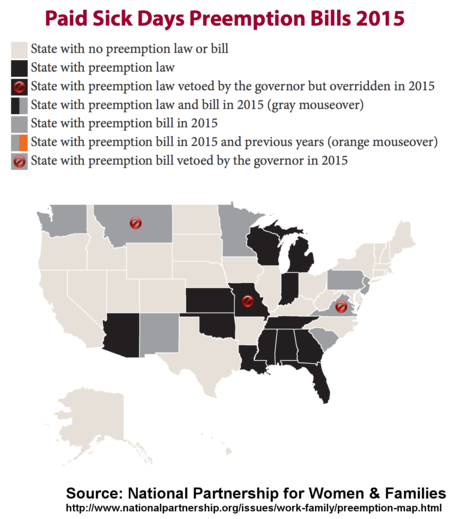 Corporate-backed state interference laws known as preemption bills prohibiting paid sick days have passed at the state level in Wisconsin, Louisiana, Mississippi, and other states that would override or preempt (or, as one GOP operative put it, "deliver the kill shot" to)[12] local laws requiring paid sick days.

This paid sick day preemption effort can be traced back to Wisconsin Governor Scott Walker and the American Legislative Exchange Council (ALEC), as the Center for Media and Democracy (CMD) first reported in 2013.[13]

Walker pushed Senate Bill 23 to override a Milwaukee ordinance providing for paid sick days in May of 2011.[14] This appears to have been the first paid sick days preemption bill passed in the country.

Milwaukee's ordinance had passed via referendum with nearly 70 percent of the popular vote in 2008.[15]

The bill was brought to the Labor and Business Regulation Subcommittee of the ALEC Commerce, Insurance and Economic Development Task Force at ALEC's August 2011 Annual Meeting in New Orleans a few months later. Meeting attendees were given complete copies of Wisconsin's 2011 Senate Bill 23 (now Wisconsin Act 16) as a model for state override.[13][16] ALEC's Labor and Business Regulation Subcommittee was co-chaired by YUM! Brands, Inc. -- which owns Kentucky Fried Chicken, Pizza Hut, and Taco Bell -- at the time.[17]

Legislators attending the subcommittee meeting were also given a target list and a map of state and local paid sick day policies prepared the National Restaurant Association (NRA), an ELC member.[18]

The Wisconsin state chapter of the NRA lobbied for Senate Bill 23 to repeal Milwaukee's sick days ordinance, as did the local branch of the U.S. Chamber of Commerce, also an ALEC member.[13]

A similar pattern of opposition has emerged across the country. As cities like Seattle, Portland, and Philadelphia have taken up paid sick day laws, the state and local chapters of the NRA and the U.S. Chamber of Commerce have lined up against it.[13]

Other consistent paid sick day opponents include the National Federation of Independent Business (NFIB)[8] and Darden -- the parent company of Olive Garden, Capital Grille, and other restaurant chains. Darden was previously an ALEC member and has had a representative on ALEC's corporate board, but cut ties with ALEC in January 2010 after deciding "to allocate resources and time to organizations that would serve us best . . . like the National Restaurant Association," according to a company spokesperson.[13]

A coalition of corporate lobbying groups including the National Federation of Independent Business, the National Restaurant Association, and the American Hotel and Lodging Association that has long opposed paid sick days recently started pushing preemption bills in many states.[8][9][10] The preemption strategy may be a "faster, cheaper alternative" to fighting ballot referenda, according to Mother Jones.[11]

The campaign has also included close monitoring of minimum wage protests and labor activists, according to documents obtained by Salon.[19]

In 2015, David Koch's astroturf group Americans for Prosperity fought paid sick days in New Brunswick New Jersey with a series of press releases. “The members of the council may be well-intentioned, but the reality is mandating paid sick time will do far more harm than good for the residents and businesses within the City of New Brunswick,” stated AFP Communications Director Mike Proto.

The business groups fighting paid sick days appear to make use of front groups, organizations created in order to disguise the identities of their backers.

For example, representatives of the National Restaurant Association have been known to cite studies by the Employment Policies Institute (EPI), one of the many front groups created by and housed in the office of the PR firm Berman & Co.[8] The EPI "has no employees of its own," shares the same office as Berman's PR firm, and funnels money to the PR firm, as The New York Times reported in a 2014 front page story.[20]

In another example, Worker Center Watch -- a group that has targeted workers' centers like ROC United and OUR Walmart -- has close ties to Joseph Kefauver, whose PR firm registered its website, as reported by The Nation,[21] and who is also on the board of another Berman front group, the Center for Consumer Freedom (renamed the Center for Organizational Research and Education).[22] Kefauver has worked as a consultant for the National Restaurant Association and formerly worked for Darden's political action committee and in public affairs at Walmart.[21] 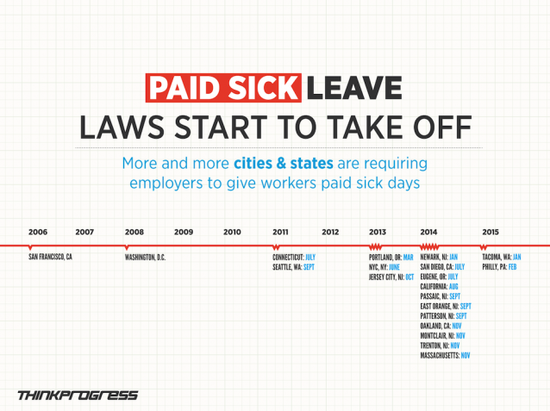 The U.S. government does not have any national law requiring paid sick days nationwide as of 2015. Companies that fall under the Family and Medical Leave Act (FMLA) are required to provide "up to 12 weeks of unpaid leave for certain medical situations for either the employee or a member of the employee's immediate family." That law applies only to firms of 50 or more; employees must have been on the job for at least a year and work at least 1250 hours a year to qualify. The FMLA generally does not include routine illness or preventive health appointments, and by being unpaid is hard even for those who are eligible.[23] President Barack Obama called for a national paid sick days policy in his 2015 State of the Union Address, saying, "Send me a bill that gives every worker in America the opportunity to earn seven days of paid sick leave. It's the right thing to do."[24]

Workers without paid sick days are one-and-a-half times more likely to go to work with a contagious illness.[13]

Productivity lost due to health issues costs businesses an estimated $225.8 billion per year.[25]

Such workers also pose substantial risks to public health. For example, "gaps in paid sick leave result in severe impacts on public health and the economy as recent studies on H1N1 confirmed: In 2009, when the economic crisis and the H1N1 pandemic occurred simultaneously, an alarming number of employees without the possibility of taking paid sick days attended work while being sick. This allowed H1N1 to spread into the workplace causing infections of some 7 million co-workers in the USA alone," according to the World Health Organization.[26] An estimated 12,469 deaths occurred in the U.S. in 2009 as a result of H1N1.[27]

Another study shared by the U.S. Centers for Disease Control found that close to 12 percent of food service workers reported coming to work while experiencing vomiting or diarrhea, but those who had paid sick days were half as likely to have done so.[28]

Paid Sick Days Campaigns and Laws in the U.S.

A study of the policy's early impacts published in the American Journal of Public Health found that, by 2009, 99 percent of large businesses and 86 percent of small businesses offered paid sick days, with a greater proportion of low-wage firms (such as food- and accommodations-industry businesses) having to make major changes to or adopt new policies.

Another study found that business had grown in San Francisco compared to neighboring counties, including among small businesses and in the retail and food sectors.[41]

A 2013 report by the D.C. auditor found that the law had increased access to paid sick days, with 68 percent of employers offering it compared to only half prior to the law. 87.5 percent of business respondents said that the law would not force them to move their businesses. According to the auditor's report, "According to District businesses owners interviewed by the Auditor, the paid sick leave requirement of the Act did not discourage owners from establishing businesses in the District. Additionally, the business owners stated that the policy requirement of the Act did not encourage owners to move their businesses from the District."[42]

A report issued in 2014 by the city auditor and a University of Washington research team found that, while some employers initially feared the new leave requirements would be costly and confusing, after implementation most said that it "had a small to negligible impact on the complexity or sustainability of their operations."[45]

The report also offers suggestions to reduce confusion and make implementation easier, such as information outreach to HR staff and a sufficiently long phase-in period.[45]