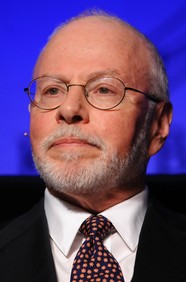 The Paul E. Singer Foundation(formerly known as the Paul and Emily Singer Family Foundation) is a 501(c)(3) private foundation located in Wilmington, Delaware. Paul Singer, President and founder of the foundation, is also the founder of the hedge fund firm Elliott Management, which has oversight over $21 billion.[1] Singer is an advocate for conservative political causes, but is also a huge supporter of gay rights and gay marriage, and even created a super PAC to support Republican candidates who favor gay rights.[2]

Through his foundation, Singer gives many grants to members of the State Policy Network (SPN), such as the American Enterprise Institute and the Manhattan Institute for Policy Research, where he serves as the Chairman of the Board of Trustees.[3]

Singer has played an important role as a "bundler" for many Republican campaigns, including Mitt Romney's in the 2012 election against Barack Obama. He donated $1 million to the Romney super PAC "Restore the Future," and contributed $220,000 to various Republican campaigns after Obama's first election in 2008.[4] Not only did Singer donate to the super PAC, but he also helped raise $5 million for Romney's campaign at one Manhattan fundraiser.[2] A Republican party insider said of Singer's political influence, "All the candidates come to pick his brain."[4]

Ties to DonorsTrust, a Koch Conduit

DonorsTrust is considered a "donor-advised fund," which means that it divides its funds into separate accounts for individual donors, who then recommend disbursements from the accounts to different non-profits. Funds like DonorsTrust are not uncommon in the non-profit sector, but they do cloak the identity of the original donors because the funds are typically distributed in the name of DonorsTrust rather than the original donors.[6] Very little was known about DonorsTrust until late 2012 and early 2013, when the Guardian and others published extensive reports on what Mother Jones called "the dark-money ATM of the conservative movement."[7][8]

Americans for Prosperity, an organization founded and funded by the Koch brothers, received nearly $9.5 million from DonorsTrust and Donors Capital Fund from 2010 to 2012.[9]

The Paul Singer Family Foundation contributed $$75,000 to DonorsTrust and Donors Capital Fund between 2009 and 2011 (see links to the foundation's IRS forms 990 below).

A report by the Center for Public Integrity exposes a number of DonorsTrust funders, many of which have ties to the Koch brothers. One of the most prominent funders is the Knowledge and Progress Fund, a Charles Koch-run organization and one of the group's largest known contributors, having donated nearly $9 million from 2005 to 2012. Other contributors known to have donated at least $1 million to DonorsTrust include the Richard and Helen DeVos Foundation, Donald & Paula Smith Family Foundation, Searle Freedom Trust, Lynde and Harry Bradley Foundation, and the John M. Olin Foundation.[10]

Since its inception in 1999, DonorsTrust has been used by conservative foundations and individuals to discretely funnel nearly $400 million to like-minded think tanks and media outlets.[10] According to the organization's tax documents, in 2011, DonorsTrust contributed a total of $86 million to conservative organizations. Many recipients had ties to the State Policy Network (SPN), a wide collection of conservative state-based think tanks and media organizations that focus on shaping public policy and opinion. In 2013, the Center for Media and Democracy released a special report on SPN. Those who received DonorsTrust funding included media outlets such as the Franklin Center and the Lucy Burns Institute, as well as think tanks such as SPN itself, the Heartland Institute, Illinois Policy Institute, Independence Institute, Mackinac Center for Public Policy, South Carolina Policy Council, American Legislative Exchange Council, Manhattan Institute for Policy Research, Oklahoma Council of Public Affairs, and the Cascade Policy Institute.[11]

Singer also serves as Chairman on the Board of Trustees for the Manhattan Institute for Policy Research, a New York-based SPN member.

Other Contributions and Grants

In addition to the foundation's $1,495,000 in grants to right-wing organizations and think tanks associated with SPN, the foundation also contributes to organizations focused on American-Israeli relations such as the Israel Project and Birthright Israel, in addition to medical centers, universities, and community organizations. The remaining $13,303,097.79 in contributions from 2009 to 2011 include but are not limited to :

According to the organization's 2012 Form 990, the board of directors include:[5]