A by-election for the Legislative Council seat of Pembroke was held on August 1, following the resignation of former Labor Party member, Allison Ritchie. Ritchie resigned following controversy over her employment of family members as her office staff. (See Allison Ritchie nepotism controversy for more details).

As of August 2, the Liberal Party candidate, Vanessa Goodwin, gained 38.52% of the primary vote and had an unassailable lead. The Tasmanian Greens candidate, Wendy Heatley came in second with 12.76%. The Labor-inclined candidates, James Crotty and Honey Bacon polled poorly - 8.8&% and 10.3% respectively while candidates with a local government background --Richard James, John Peers and Peter Cooper respectively polled 11.33%, 9.61% and 7.49%.[1]

The Tasmanian Electoral Commission has announced that it will do a provisional distribution of preferences will commence at 11am Wednesday 5 August.

Background to the by-election

William Bowe, writing at the Poll Bludger blog, notes that Ritchie "was first elected to the seat in 2001 when she defeated independent incumbent Cathy Edwards, in large part due to her successful attacks upon Edwards’ dual role as Mayor of Clarence, and easily won re-election in 2007."[2]

The Legislative Council, the upper house in the Tasmanian parliament, comprises 15 single-member electorates. Each member is elected for a six-year term. Three electorates come up for election in one year and two electorates in the subsequent year. As a result, Legislative Council elections often fail to garner much media attention. Candidates are only allowed to spend a maximum of $12,000 on their campaign. If they overspend by over $1,000 the Tasmanian Electoral Commission warns that "a court may declare their election void." Under section 162 of the Electoral Act of 2004 "no political party expenditure is allowed at Legislative Council elections." 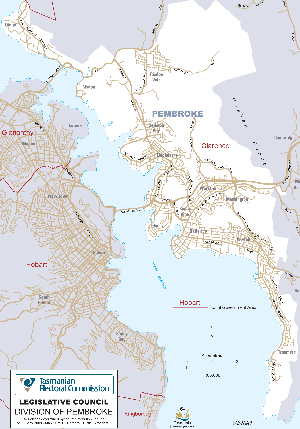 The electorate covers a swathe of the Hobart's eastern shore, spanning a strip along the Derwent River from Otago and Risdon Vale in the north through to Howrah and Tranmere to the south-east. (A full sized Tasmanian Electoral Commission map is available here).

In July 2009, the Tasmanian Electoral Commission announced that at the close of the electoral rolls for the by-election on June 30, 2009, there were 24,697 electors in the division of Pembroke.[3]

The polling booths will be open between 8 a.m. and 6 p.m.

Nominations for the seat closed at 12 noon on Thursday 9 July 2009. Those who nominated included:[4]

Bartlett's reaction to Labor's decision not to endorse a candidate

After the Labor Party decided not to endorse a candidate in what had previously been a Labor seat, David Bartlett issued a media statement endorsing the decision of the Labor Party Administrative Committee and claimed that he wouldn't "be distracted" from concentrating on his agenda. In an indication of the issues that he would be rather talking about, Bartlett stated that his agenda was aimed at "delivering innovation in Tasmania based on the foodbowl plan, optic fibre roll out and renewable energy. I am committed to key infrastructure upgrades in transport, water and telecommunications. And I will be delivering on our social inclusion strategy that treats the causes of disadvantage in Tasmania, not just the symptoms. We recognise we have a lot of work to do in keeping the economy strong, keeping the state finances solid, keeping our education and health outcomes headed in the right direction and creating and sustaining jobs. "[11]

ABC election analyst, Antony Green, has compiled voting data based on the booths within Pembroke since the 2001 election.

% Vote by Party in Pembroke Booths[12]

Traditionally, Legislative Council elections are relatively low-key affairs, with only a few seats up for election each year. Combined with the six-year term, Legislative Council elections tend to focus on local issues rather than broader statewide issues. The 2009 Pembroke by-election is likely to be different. The Liberal Party's decision to break with tradition and endorse a candidate, rather than rely on Liberal-inclined independents, reflects the intention of the Opposition Leader, Will Hodgman, to cast the election as an opportunity for voters to cast judgment on government of Premier David Bartlett, which has been mired in controversy on a wide range of issues.

Redistribution and the 2009 election

The addition of 423 voters from Otago and part of Risdon would be expected to favour Labor-inclined candidates, while the addition of 521 voters from parts of Geilston Bay and Mornington are more likely to be spread across the field.

At the start of the election campaign, Vanessa Goodwin "paid for advertising on Google so that if a user types in the name of any of the candidates in the Legislative Council by-election, the Vote 1 Goodwin 4 Pembroke' ad will appear in a prominent sponsored link box at the top or side of search results," wrote Damien Brown in The Mercury. Goodwin's campaign also bought "Pembroke", "Legislative Council" and "candidates". "It was just something different and unique I wanted to try and with the spending cap you have to be innovative and keep it low-cost," Goodwin said.[16]

Section 197 of the Electoral Act 2004 states that "between the issue of the writ for an election and the close of poll, it is an offence to print, publish or distribute any advertisement, “how to vote” card, handbill, pamphlet, poster or notice which contains the name, photograph or a likeness of a candidate or intending candidate at that election without the written consent of the candidate."[17] However, buying the Google search terms for another candidate so that the only paid link to display was that of Goodwin's, does not consist of publish another candidate's name. The Acting Commissioner of the Tasmanian Electoral Commission, Julian Type, told The Mercury that he didn't consider it to be a breach of the act. "It is not in the spirit of the legislation or the election." , said Greens candidate, Wendy Heatley.[16]

A debate over a debate

Near the close of nominations, James Crotty proposed that a public debate be held with Wendy Heatley and Vanessa Goodwin.[18] Heatley indicated an interest in participating "provided all candidates are invited."[19] While Tasmanian political scientist had agreed to chair the debate, as long as a significant number of candidates agreed to participate. Honey Bacon told The Mercury that her schedule was full and that it was unlikely she would have time for a debate. "I would consider it as long as it was properly organised and not some stunt," Vanessa Goodwin said.[20]

In the end, all the candidates, except Vanessa Goodwin and Honey Bacon agreed to participate. The video of the debate, which was held at the Beltana Bowls Club on Tuesday July 21st, can be found here.

Issues raised in the election campaign

Some of the issues raised in the election campaign included:

Political analyst, Richard Herr, told The Mercury that "the Labor Party would feel somewhat relieved to have a large field of notables running because it will confuse the issue of what the Labor vote really is. With possibly five candidates able to get double figures, it is hard to see anyone getting a majority of first-preference votes. If it comes down to preferences, it will take the lustre off a Vanessa Goodwin win if it was to occur," he said.[27]

Two weeks before the election, analysts Peter Tucker and Kevin Bonham estimated that "Goodwin should achieve somewhere in the thirties on the primary vote. High thirties or more should guarantee her a victory unless Honey Bacon is not far behind, while low thirties or worse will mean a nervous time during the preference distribution."

A few days ahead of polling day, in a comprehensive review of the election campaign, Tucker and Kevin Bonham concluded that "the only candidates with remotely realistic chances are Crotty, Bacon and Goodwin, and of these Goodwin is the only one who is more or less certain to poll competitively ... the Bacon campaign has not been all that it could have been, and for this reason the Liberals will need to have a good hard look at themselves if they cannot win this one (however narrowly) after this campaign and in these circumstances."[28]

Based on the rechecked Tasmanian Electoral Commission results, posted on Sunday August 2, the latest results are:

The Tasmanian Electoral Commission has announced that it will do a provisional distribution of preferences will commence at 11am Wednesday 5 August.[1]

The Tasmanian Electoral Commission states that "all candidates must file an accurate return of their electoral expenditure with the Electoral Commission, within 60 days of the result of the election being declared. The Commission may extend this period by a further 30 days ... This return must show: • all election expenditure paid by the candidate (or by his/her election agent) relating to the campaign; and • all disputed claims, and all unpaid claims in respect of any election expenditure."[29]

All receipt for amounts over $20 must be provided and the commission retains "all returns for a period of 12 months after filing, and they are open to public inspection during this time." (For the Pembroke by-election, expenditure returns must be provided by October 1 or, if an extension is granted by the commission, November 1.)[29]

On August 1 and after, election night results were featured on: