From SourceWatch
< Portal:Fix the Debt
Jump to navigation Jump to search 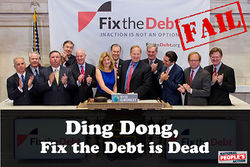 The Campaign to Fix the Debt – billionaire Pete Peterson’s Wall Street-backed austerity front group – is scaling down and shedding staff after failing to achieve any of their toxic goals.

Their fake youth group, “The Can Kicks Back,” is in debt and about to kick the bucket. They are packing up their phony “can man” and their Mercedes BMW tour mobile (bizarrely called the AmeriVAN) and putting Simpson-Bowles in mothballs. Read our piece on how astroturf got mowed by real people.

Since our February 2013 front page expose on this “astroturf supergroup” in the Nation, you helped us spread the word and call out the tax dodging hypocrites with platinum plated pensions pushing harmful budget cuts. Fix the Debt failed because Americans aren’t interested in cutting Social Security or Medicare to offset more tax handouts to big corporations.

Now we learn that President Obama has struck “chained CPI” Social Security cuts from his budget proposal. It is time to take advantage of this important victory to pivot to a discussion on how to improve and strengthen these lifesaving programs to preserve them for future generations.

Help us continue to be an independent voice in the budget battles.
Please consider a generous donation today.

Dear WWII Vets, Forget About the Monument, They Are Gunning for Your Social Security! 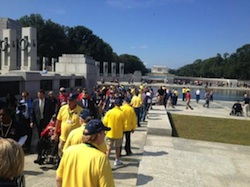 Apparently the only thing both Democrats and Republicans can agree on in Washington, D.C. is that they can't deal with bad press involving Honor Flight vets.

This led to absurd images of Republicans -- who had shut down the federal government, including all monuments and museums -- rushing to "aid" veterans shut out by monument closures. In the most revolting display, Rep. Randy Neugebauer (R-CA) publicly berated a National Park Service Ranger for a situation created entirely by Congress.

As the government shutdown marches on and the dangerously real deadline of the federal debt limit approaches, it is increasingly clear that the fight over "Obamacare" is merely an opening salvo. The real goal of the hostage takers is a "Grand Bargain" on the budget that would include cuts to Social Security and Medicare.

This has been the long-term agenda for debt crisis-monger Pete Peterson and government haters David and Charles Koch for many decades. But now, after massively gerrymandering the electoral landscape in 2010, these manufactured crisis kings and backstage billionaires hold all the cards.

Rev up those engines. It's time for the Honor Vets to head back to Washington to save us all.

New Heights of Hypocrisy in Latest "Fix the Debt" Ad

Today, the group launched a six figure TV ad buy that reaches new heights of hypocrisy -- and that is saying a lot.

Former U.S. Senator Alan Simpson and Morgan Stanley board member Erskine Bowles have long been spokespersons for Fix the Debt. The "folksy" Simpson: "For cryin' out loud, Erskine, who isn't fed up with what's goin' on in Washington?" The Bowles tsk tsk: “These politicians are playing games jerking our country around from crisis to crisis.”

This is rich from a group that has been hyping a debt and deficit crisis since its launch in July 2012, even though the deficit has been cut in half in recent years. In January 2013 Fix the Debt steering committee member and former Tennessee Governor Phil Bredesen admitted that Fix the Debt's strategy was to create an "artificial crisis" to achieve a "grand bargain" on Medicare and Social Security.

Moreover, Fix the Debt was started with a $5 million donation from crisis king Pete Peterson. Peterson has been warning that our Social Security would create a “Pearl Harbor” type crisis for decades as my colleague Lisa Graves documented in her Nation piece “Long History of Deficit Scaremongering.”