From SourceWatch
< Portal:Food Sovereignty
Jump to navigation Jump to search

This month, the Center for Media and Democracy's new Food Rights Network launches a series of interviews with "food and farm heroes." It's easy for an organization dedicated to exposing corporate spin to focus on negative corporate propaganda with its ubiquity, but would be remiss not to highlight courageous people who fight corporate agendas and spin in other ways, large and small. Some devote their lives to it. 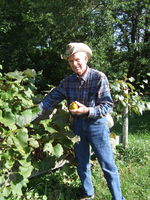 In the world of food and farming, the contrast between corporate agribusiness "farms" and small, sustainable family farms -- farms that, to adapt a phrase of Michael Pollan's, our grandparents would recognize as food-producing places -- is especially clear. Among the farmers who live and work in these places, CMD's Food Rights Network is featuring some of the heroes: farmers who are making an incredible difference in the farming community, on our dinner tables and in the world around them.

The first farmer hero we feature is John Kinsman, a dairy farmer from Lime Ridge, Wisconsin. He is a pioneer of rotational grazing, a strong proponent of small, diversified agricultural operations, and an activist since the 1970s.

For more, see PRWatch, the video interview in the righthand column, the audio here and here, and the transcript.