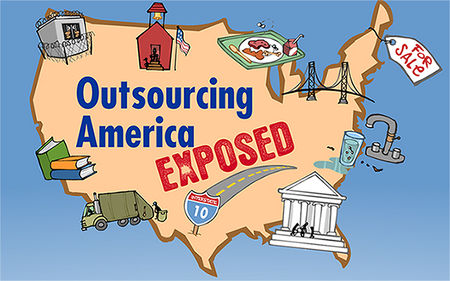 Macquarie Group Limited is a publicly-traded (ASX:MQG) for-profit global investment bank that describes itself as “a global provider of banking, financial, advisory, investment and funds management services.”[1] Part of the international business, Macquarie Infrastructure Company, LLC, is a Delaware, Maryland limited liability company that is publicly traded in the United States (NYSE: MIC). The investment banking service and its numerous subsidiaries are involved in privatization of government assets across the board, including: toll roads, airports and airport related infrastructure, bulk liquid storage, ports, communications, media, electricity and gas distribution, water utilities, renewable energy, and rail and ferry assets across 25 countries.[2] The international group had revenues of $6.7 billion in the fiscal year ending March 31, 2013.[3][4] The U.S. LLC had revenues of over $1 billion in the fiscal year ending December 31, 2012.[5] On May 2, 2013, Macquarie Group announced a net profit of $846.8 million for ordinary shareholders, up 17 percent since March of 2012.[6][4]

Read our Special Report by Brendan Fischer -- Corporate Expressways, Brought to You by Macquarie and Transurban -- on PRWatch.
For more, see the full corporate rap sheet on the outsourcer Macquarie here.

Transurban describes its role in the international infrastructure business as "developing pragmatic solutions to manage congestion and to do this in a disciplined, and ultimately sustainable way."[11] Transurban CEO Scott Charlton urges governments to engage in "capital recycling," which is the selling of public assets to fund new infrastructure projects operated through public-private partnerships that place more risk on private companies, but also public control and accountability.[12]

Read our Special Report by Brendan Fischer -- Corporate Expressways, Brought to You by Macquarie and Transurban -- on PRWatch.
For more, see the full corporate rap sheet on the outsourcer Transurban here.

Waste Management, Inc. (known as Waste Management or WM) is a publicly-traded (NYSE:WM) for-profit waste management company headquartered in Houston, Texas. It is the largest waste collection corporation in North America. It is in the business of waste collection and transfer, recycling and resource recovery, and waste disposal for residential, commercial, industrial and municipal customers in North America.[13] In the United States, waste management services have traditionally been provided by municipalities and public employees,[14] but starting in the 1980's the privatization of this sector accelerated. According to a 2007 survey of local governments, some 50 percent of solid waste management is now provided by major for-profit firms like Waste Management.[15] WM has been a driving force in the privatization of these services. WM workers are paid significantly less than their public sector counterparts.[16] The number of deaths in this dangerous industry was higher among workers at for-profit companies than among public sector workers from 2003 to 2009.[17]

Read our Special Report by Rebekah Wilce -- Waste Management Reaps Treasure from Your Trash and Taxes -- on PRWatch.

American Water Works Company, Inc., known as American Water, is a publicly traded (NYSE: AWK) water utilities and sewage treatment company headquartered in Voorhees, New Jersey. It is the largest for-profit provider of water and wastewater services in the United States where 86 percent of consumers receive their water services from public municipal water systems.[18] According to American Water's 2012 Annual Report, it supplies "an estimated 14 million people with drinking water, wastewater and other water-related services in over 30 states and two Canadian provinces" and employs approximately 6,700 as of 2012.[19] American Water has been a major force behind the privatization of water services and has come under fire from communities across the country for charging high rates and providing poor services.[20] In 2012, American Water generated $2.9 billion in total operating revenue.[19] CEO Jeffrey Sterba has made over $8 million in the three years he has headed up the company.[21]

In 2011, Citigroup economist Willem Buiter predicted that "water as an asset class will, in my view, become eventually the single most important physical-commodity based asset class, dwarfing oil, copper, agricultural commodities and precious metals."[22] But some American cities are fighting this commodification of precious water resources and have engaged in successful campaign to take back or "municipalize" public water utilities.

CH2M Hill is an "engineer-procure-construct" company offering a wide range of services to industries and governments. It is based in Englewood, Colorado[23] and, according to the company's website, has locations in 122 countries and 28,000 employees.[24] Although CH2M Hill promotes its image by advertising its government contracts in Iraq and in New Orleans after Hurricane Katrina,[25] it is heavily focused on privatizing public infrastructure and waste systems for local and state governments. It has been criticized for its "contract cities" or "outsourced cities" and its expansive model of privatization of government services.[26] For the 12 months ended December 31, 2012, the company's total revenue was $6.2 billion, and its net income was $93 million.[27]

Read our Special Report by Brendan Fischer and Seep Paliwal: Outsourced Cities, Brought to You by CH2M Hill on PRWatch.

MAXIMUS, Inc., based in Reston, Virginia, is a publicly-traded (NYSE:MMS) for-profit corporation that receives government contracts to provide "business process services" to government health and human services agencies in the United States, Australia, Canada, the United Kingdom, and Saudi Arabia. The company focuses primarily on operating government-sponsored programs for vulnerable populations, such as Children’s Health Insurance Program (CHIP), Medicaid, health insurance exchanges and other health care reform initiatives under the Affordable Care Act, Medicare, welfare-to-work, and child support services.[13] The outsourcing of health and human services function to private for-profit firms raises significant concerns. According to non-profit research group In the Public Interest, a comprehensive resource center on privatization and responsible contracting, "many children and adults rely on government-provided health and human services. The ability of these programs to deliver services efficiently and appropriately often is a matter of life and death. Numerous state and local governmental entities are finding that turning over these programs to private contractors not only fails to achieve projected cost savings but also decreases access to these important services, hurting many vulnerable families. In many cases, the service quality declines dramatically and many sick or at-risk people are left with substandard care."[28]

Read our Special Report by Nick Surgey and Katie Lorenze: Profiting from the Poor: Outsourcing Social Services Puts Most Vulnerable at Risk on PRWatch.

Affiliated Computer Services, Inc. (ACS), is a private firm that specializes in the privatization of government administrative services for some of the nation's most vulnerable citizens. Since 2000, it has been a subsidiary of the publicly-traded Xerox Corporation (NYSE:XRX)

Read our Special Report about outsourcing human services by Nick Surgey and Katie Lorenze: Profiting from the Poor: Outsourcing Social Services Puts Most Vulnerable at Risk on PRWatch.

K12 Inc. is a publicly-traded (NYSE: LRN) for-profit, online education company headquartered in Herndon, Virginia. As K12 Inc. notes in its most recent annual report, "most of (its) revenues depend on per pupil funding amounts and payment formulas" from government contracts for virtual public charter schools and "blended schools" (combining online with traditional instruction) among other products. In 2013, K12 Inc. took in $848.2 million from its business, with $730.8 million coming from its "managed public schools" and thus the U.S. taxpayer.[32]

Connections Academy is a division of Connections Education, LLC, which is owned by the UK-based, publicly-traded international media conglomerate Pearson PLC (LSE:PSON, NYSE:PSO).

The company's website says it provides "free" services since it does not charge students, but the services are far from free as they divert taxpayer dollars from the public school system to a private for-profit firm, Connections Education, that made an estimated $190 million in revenue in 2011.[37]

Connections Academy contracts with public school districts and charter schools to provide online classes for K-12 students.[38] Connections Academy had 21 schools and more than 27,000 students in the 2010-11 school year.[39] But some of those schools are failing.

Sodexo is a multinational company based in France that provides food services to schools, college campuses, the U.S. military, and other government entities across the United States. With about $8.8 billion in annual revenues from operations in North America,[40] Sodexo is a primary driver of outsourcing of food services in America.

But Sodexo has taken the low road to profitability.[41]

Sodexo Group is the largest food services and facilities management company in the world, as of 2013.[42] Sodexo contracts to provide food services to private corporations, government agencies, schools and universities, military bases, hospitals, clinics, senior residential facilities, and correctional facilities, and is a primary driver of the privatization and outsourcing of these services.[43][44]

For more, see the full corporate rap sheet on the outsourcer Sodexo here.

Corrections Corporation of America (CCA) is the largest owner of for-profit prisons and immigration detention facilities in the United States.[45] It is publicly traded (NYSE: CXW). In 2013, CCA was converted into a real estate investment trust (REIT), which will help the company avoid tens of millions of dollars in corporate taxes.[46][47] CCA's revenue in 2012 exceeded $1.7 billion, and it had profits of $156.8 million, 100 percent of which came from taxpayers via government contracts.[45]

For more, see the full corporate rap sheet on the outsourcer Corrections Corporation of America here.

The GEO Group, Inc. (GEO), formerly known as Wackenhut Corrections Corporation, "is the world's leading provider of correctional, detention, and community reentry services with 95 facilities, approximately 72,000 beds, and 18,000 employees around the globe," says the corporate website.[48] It is the second-largest for-profit prison operator in the United States, behind CCA.

Since its founding nearly 30 years ago, GEO Group has profited from the same policies and dramatic rise in incarceration and detention in the United States as CCA has.[49][50][51] Although it claims that it has not lobbied for bills that extend or increase sentences for prisoners, for many years GEO Group participated in the task force of the American Legislative Exchange Council (ALEC) that pushed bills that lengthened time in prison, such as so-called “truth-in-sentencing” and “three strikes” legislation, as models for states to adopt across the nation.