The Center for Media and Democracy produced a Wall Street Bailout Tally of all 35 Federal Reserve and Treasury Department programs. While, the mainstream media focuses on the $700 billion TARP bailout bill and its related programs, the actual tally is closer to $4.7 trillion -- yes trillion with a "t". Check out our tally here. The Bailout Bubble graph below puts this number in perspective.

Bloomberg News did a series of Freedom of Information Act requests of the Federal Reserve about their back door bailouts of financial institutions at the height of the financial crisis. Their article "Secret Fed Loans (of $7.7 trillion) Gave Banks $13 Billion (profits) Undisclosed to Congress" is long but a must read. They also have some specific databases that allow for bank by bank research. 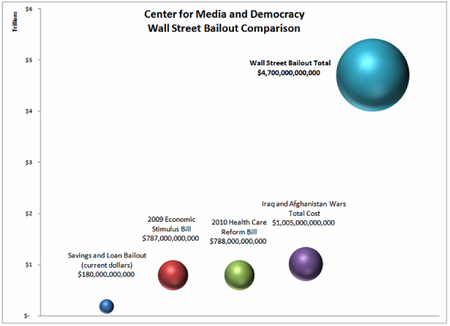 References for the statistics in the chart:
This chart and an article by CMD's Mary Bottari was featured in Dollars and Sense Magazine.
The S&L Crisis (audited RTC statements adjusted to 2010 dollars)[1]
Track the Recovery Money[2]
The CBO's Estimated Health Reform Cost[3]
Cost of U.S. Wars in the Middle East[4]
Total Wall Street Bailout Cost (see above)