Premier brand cigarette was an early "smokeless" cigarette manufactured and marketed by R.J. Reynolds (RJR) in the late 1980s. The development of the cigarette was known inside RJR as super-secret Project SPA, an attempt to create a non-combusting cigarette as a way to address health issues surrounding cigarettes and secondhand smoke.

The Premier cigarette was a "stationary furnace" device that operated by separating the combustion material (carbon) from the aerosol-generating material (mostly glycerol) so that the inhaled by-products yielded upon smoking were the distillation products (glercerol and water) rather than combustion products (nicotine and smoke constituents). This is one reason why this product failed in market. The flavoring was derived from tobacco, nicotine, the paper roll and sprayed dried extract. Additional flavors of primarily raspberry ketone and chocolate were also added to enhance tobacco taste and give rise to a "pleasing aroma" in the smoke. This added flavor was a major reason that Premier failed in market as the taste was very different from conventional cigarettes.

During its product evaluations somehow RJR missed the overwhelming consumer rejection of the product's taste and aroma. RJR pressed ahead with the rollout, however, and Premier turned out to be one of the most expensive new consumer product failures ever. Premier entered test markets amidst much fanfare only to be withdrawn later as the and billed as the "biggest new product flop of 1988."

Premier was introduced as a revolutionary "smokeless cigarette." RJR was so confident of Premier's success that it built a pilot plant, broke ground for an addition to its Tobaccoviile plant and even renamed the nationally-known "Vantage Cup" (named for its Vantage cigarette brand) professional golf circuit the Premier Cup. Published reports stated that RJR spent between $300-500 million on Premier altogether. The Wall Street Journal called Premier "one of the mostt stunning new product disasters in recent history" after it was withdrawn from test market in February 1989 due to a poor reception by smokers and a storm of protest by antl-smoking activists. The failure of Premier was cited as the reason for the layoff of 700 hourly cigarette factory workers in Winston-Salem announced in late March 1989. In August 1989, RJR announced dismissal of 1,640 more employees, or about 12% of the work force at its tobacco company. [1]

The history of RJR, the KKR leveraged buyout and the Premier cigarette was the subject of a movie called "Barbarians at the Gate" starring James Garner. 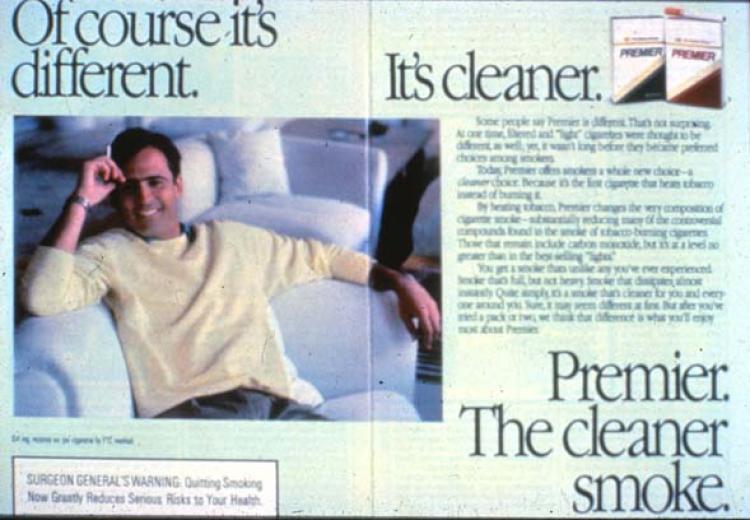 Ad for Premier cigarette (no date)