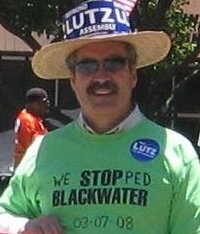 Ray Lutz is a Democratic Party candidate for the United States Congress in the 52nd Congressional District of California, which encompasses most of east San Diego county. He is also the Founder of Citizens' Oversight Projects, an ardent Anti-Blackwater activist, and a published author of a book titled Coils of the Serpent. In 2008, he ran for District 77 State Assembly seat of California.

Accomplishments as a Hero of Democracy

Lutz's candidate website speaks volumes about his accomplishment as a community democratic activist:

"The community of Potrero, California knows Raymond well. He's been a tireless worker to help them make a stand against one of the most notorious soldier-of-fortune companies, Blackwater Worldwide, and their huge private training camp proposal. He established the website, www.StopBlackwater.net and pulled together groups in the area from Veterans for Peace, the Peace Resource Center, and Activist San Diego to conduct a rally and build support for the community. Raymond worked with Rep. Bob Filner (D-California) to get federal legislation proposed to make mercenary training on private property illegal, in an attempt to block the project."[1]

Lutz is also the brainchild behind the Citizens' Oversight Project (COPS), which bears a strong resemblance to sourcewatch.org. The website can be seen here: http://www.citizensoversight.org/. On his campaign website, Lutz states, "The idea of Citizens' Oversight is that every citizen in a democracy has a duty to oversee the entire government. While you agree with the concept, you'll also agree that it's impossible because our government is huge and out of control. It's impossible, that is, unless we work together."[2]