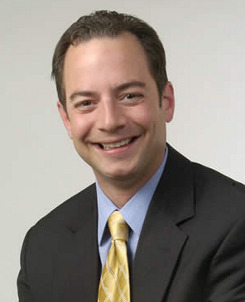 He is closely tied with Wisconsin Congressman and Speaker of the House Paul Ryan, who was championed by the Kochs as an alternative to Trump. The "Draft Ryan" talk also included the possibility of a contested convention, where a Ryan candidacy could be advanced.[1] Priebus and Ryan are friends and virtual neighbors who have worked together for decades in Wisconsin and in Washington. His elevation to chief of staff is considered a win for the Koch wing of the Republican Party that opposed Trump.[2]

Priebus also helped elect Wisconsin Governor Scott Walker to the governorship in 2010. Both Walker and Ryan have been strongly supported in their careers by the billionaire Koch brothers. The Wisconsin GOP encouraged a #NeverTrump movement in Wisconsin that delivered this northern state to Texas Republican Ted Cruz in the 2016 primary and kept his candidacy alive.[3]

Priebus Named Chief of Staff by Trump, Win for the "Koch Wing" of the Party

In his first major signal of how he will govern post-election, Donald Trump chose Reince Priebus as his Chief of Staff. The move to name Priebus to the top spot came as a shock to Trump's base, some of whom referred to Priebus as #Ryansboy, but it is another big win for the Koch wing of the Republican Party. The Kochs already have deep ties to Trump's running mate Mike Pence who leads the Trump transition team. Top Koch advisor Marc Short, who worked for Pence before heading the Kochs' Freedom Partners, also aided the the transition effort reports Politico.[4]

From Salon: "This Draft Ryan movement arises out of both the Republican establishment’s love of Ryan as a politician and their distaste for Donald Trump and Ted Cruz. Ryan is the affable mascot of the Republican donor class: he’s young, ambitious, and prioritizes massive tax cuts for the wealthy alongside boosted military spending and huge cuts to social programs. He’ll bring back Reaganomics and turn Social Security into what it was always meant to be: a bonanza for Wall Street. Ryan has also emerged as the GOP’s savior-by-default, being the only Republican of national prominence who evinces basic political competence and/or isn’t actively loathed by huge swaths of the party." [6]

The Kochs refused to share their valuable voter list with candidate Trump,[7]refused to support his race with their network of funders or paid "grassroots activists, refused to fund the convention and Charles Koch even suggested he was voting for Clinton.[8] The Kochs refused to meet with Trump as late as July 2016, reports Politico.[9]

Reince Preibus emails emerged as part of the "John Doe II" investigation of Governor Scott Walker by Wisconsin state prosecutors who were investigating potentially illegal coordination between Walker's recall campaign committee and a host of "independent" big money groups in the 2011-2012 recall period. [10]

A trove of nearly 1,500 emails from the Wisconsin John Doe II investigation was released by The Guardian on September 14, 2016. An key email from Nick Ayers of the Republican Governors Association (RGA) to Wisconsin Governor Scott Walker and copied to RNC Chair Priebus proposes a coordinated battleplan between the Walker campaign and outside spending groups including Republican Governors Association, Republican State Leadership Committee, the Kochs' Americans for Prosperity, and Club for Growth during Walker's 2011 recall campaign. See the email here. RGA would register as a "independent expenditure" group in Wisconsin and swear an oath not to coordinate with candidates, yet would meet weekly with Walker's campaign manager, provide him with fundraising lists and help arrange a key meeting between Walker and lead pigment paint manufacturer Harold Simmons. Simmons secretly donated $750,000 to Walker, followed by legal changes benefiting his company, according to the Guardian account. See the Guardian article here.

Coordination between candidate campaigns and purportedly independent expenditure groups was illegal in Wisconsin and at the federal level at the time. This email from Ayers helped spark the John Doe II investigation by a bipartisan group of state prosecutors that was ultimately shut down by the Wisconsin Supreme Court in 2015.[11] The conservative majority of the court, elected by the same big money groups under investigation, changed Wisconsin law to retroactively legalize the activities undertaken during the 2011-2012 recall races. CMD the publishers of Sourcewatch have written extensively on the topic of the Wisconsin John Doe investigation. Those articles can be found here.

Previously, One Wisconsin Now uncovered a 2010 “voter caging” scheme "intended to suppress the vote in minority voting precincts in Milwaukee that involved Priebus, the state Republican Party, Americans for Prosperity and local Tea Party affiliates." Details of One Wisconsin Now’s investigation are also available here. Two years earlier, the state Republican Party chaired by Priebus, consulted with the state McCain for President campaign chair to file a lawsuit seeking to purge hundreds of thousands of legal voters from election rolls.

He ran for election to the Wisconsin State Senate in 2004 but lost to the Democratic incumbent, Robert Wirch.[13] In 2007 he was elected chairman of the Wisconsin Republican Party. Two years later, he also became the general counsel for the Republican National Committee.[14]

As chairman of the Wisconsin Republican Party, Priebus led the party to success during the Tea Party wave in 2010. In Wisconsin, the party won control of the State Senate and Assembly, and Scott Walker was elected Governor.[15] In particular, his work to bring Wisconsin's Tea Party movement together with the mainstream Republican party organization, and avoid conflict between the two, was credited as contributing to the party's success.[16] Following the success of the 2010 elections, Priebus, together with Paul Ryan and Scott Walker became known as part of a rising Republican movement in Wisconsin dubbed the Cheddar Mafia.[16][17][18]

With donations of $111,600 and $57,700 respectively, Charles and David Koch were large backers of the RNC.[19] The political action committee of Koch Industries has also contributed $15,000. Campaign finance rules limit the amount donors can give, but in 2014 the RNC chairman Reince Priebus filed a joint lawsuit together with Louisiana Republicans in an attempt to be granted the right to raise unlimited amounts of cash from individual donors.[20] In a comment to the lawsuit, Jason Easley and Sarah Jones note that "as Harry Reid said recently, the Koch brothers are trying to remake the Republican Party. The point of this lawsuit is to let the Koch brothers, and other right wing billionaires, directly buy the RNC."[21]