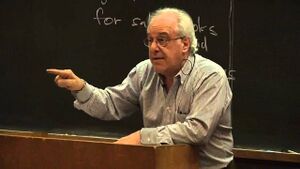 Richard D. Wolff is Professor of Economics Emeritus at the University of Massachusetts, Amherst. He is currently a Visiting Professor in the Graduate Program in International Affairs of the New School University in New York.[1][2]

Starting in 2011, Wolff has hosted a radio show called "Economic Update", produced by Democracy at Work.[3] As of 2019, the show had over 120 stations nationwide.[3] The program seeks to "take complex economic issues and make them understandable, empowering listeners with information to analyze not only their own financial situation but the economy at large."[3]

In a 2019 interview, Wolff spoke out against what he called "technological determinism", or the idea that there is "something inherent in the way that we produce goods and services that requires a hierarchical, top-down [system with a] boss at the top, layers of supervisors, and grunt workers at the bottom."[4] He compares this with monarchy, saying "human beings once thought the only way to have a society was to have a king... the king would be in charge and we were all the subjects and the king would tell us what to do, and we couldn't possibly have a society without a king... until we couldn't stand it anymore and modern societies got rid of kings... For me, it's exactly the same in the workplace: what do we need a king for?... We could work collectively, we could have co-ops, we could have communes, we could have all kinds of ways of collectively, rather than top-down, organizing the workplace."[4]

In the same interview, Wolff talks about the debate between capitalism vs. socialism becoming a proxy for a debate about big government vs. small government. He calls it a "distraction", noting how when the history of other institutions, such as feudalism or slavery, is discussed, little attention is paid to whether these serf or slaves served government officials or private masters. "Even if the state has employees just like the private [sector], if the employee comes to work from nine to five, does what the bosses tell him or her to do, in the private, pretty much like it goes in the state, it's a big deal (sarcastically) whether it's a state official who sits in the chair of the board of directors or somebody private who's elected by shareholders."[4]

Wolff challenges the association of socialism with big government, arguing capitalism also creates "authoritarian" boss-employee dynamics in the workplace. Wolff believes having a boss or manager telling most Americans what to do eight hours a day, five-days-a-week primes them to accept government officials exercising control over their lives.[4] In contrast, Wolff believes human beings are naturally prone to increasing democracy in every aspect of their lives, saying "that's why we don't have kings anymore" and thinks that the workplace is one of the "last frontiers" that he expects democracy to overtake.[4]

Blogger adamfreedom offered several criticisms of Wolff's favored worker-owned business solution, including a worry about their uncompetitiveness within a capitalist system, claiming that "Corporations will always have larger capital to invest in research, technology, machinery and their willingness to cut costs through lower wages, less environmentally sounds [sic] practices, outsourcing, etc, will give them an advantage."[5]