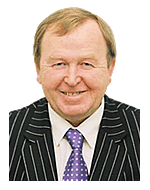 Robert Durward is based in Scotland where he operates a granite quarry company which he formed in 1982. In 1999 he formed the British Aggregates Association to "help protect independent quarry firms from adverse legislation and unfair competition."

The New Party (a.k.a. the People's Alliance) is a new UK party which promotes "direct democracy" and deregulation. Prior to November 2004, its domain name, http://www.newparty.co.uk/, was registered to Mark Adams of Foresight Communications, which also handles PR for the Scientific Alliance.

According to the Electoral Commission, Durward's company (Cloburn Quarry Company Ltd) donated over Â£360,000 to the New Party during 2004 (supporting documents). The Party's total income for that year was Â£374,000 according to its audited accounts which are also available from the commission here. According to the party accounts Durward hold the position of party treasurer. Cloburn Quarry Company Ltd and the New Party share the same accountants and auditors (I A Stewart and Co, Lanark).

In 2001, Durward was in the news for suggesting in a letter to a newspaper that the army could run public services. He has said that comment was made about the fantastic job they made of handling the foot and mouth crisis - and did not mean he really wanted martial law for the whole country. [1]