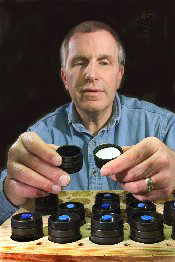 Roger Allen Jenkins, Ph.D was a chemist at Oak Ridge National Laboratory (ORNL), and has been called by defendant tobacco companies to testify as an Industry Expert. Jenkins performed studies funded by tobacco industry's front group "Center for Indoor Air Research" (CIAR), and subsequently turned out results favorable to the industry. He stated that he and his colleagues had developed study methodology with input from the CIAR and R.J. Reynolds (RJR). Oak Ridge National Laboratory (ORNL) received $797,892 in 1993 for Jenkins to conduct a study titled "Determination of Human Exposure to Environmental Tobacco Smoke." He testifies on behalf of the tobacco industry, but was barred from being a Tobacco Institute witness in the Florida flight attendants (Norma Broin) case on the grounds that RJR's assistance with his field work and lab analyses made his research suspect.

Roger Jenkins obtained a bachelor's degree in chemistry from Michigan State University in 1969, then attended the University of Wisconsin at Madison and received a master's degree in analytical chemistry in 1972 and then a Ph.D in analytical chemistry in 1975. He started working for Oak Ridge National Laboratory (ORNL) in December 1975. He has a Department of Energy "Q" clearance, which allows him to see classified material, including classified information regarding national security.

As a chemist with ORNL, Jenkins provided testimony for the tobacco industry during the Florida flight attendants' lawsuit (the Norma Broin case), a personal injury class action case brought on behalf of thousands of flight attendants who claim to have suffered injuries from working prolonged hours in closed environments with high levels of tobacco smoke. According to an article from the Associated Press, Jenkins performed research on tobacco smoke and Environmental Tobacco Smoke (ETS) exposure for the tobacco industry, specifically on research commissioned by R.J. Reynolds and the CIAR.

The Dade County Circuit Court Judge Robert P. Kaye barred Roger Jenkins from testifying as a defense witness in the Broin case regarding his secondhand smoke studies, on the grounds that R.J. Reynolds' assistance with his field work and lab analysis made the research suspect. The authors of a 1996 study on CIAR-funded projects stated that "One recipient of an applied project, Roger A. Jenkins (1995), of Oak Ridge National Laboratory, testified at length regarding the funding process for his project.

He stated that CIAR had approached him with a proposal for his project, and that he and his colleagues had developed the study methodology with input from CIAR, RJ Reynolds Tobacco, and Bellomy Research (a marketing research firm)." The authors cite CIAR tax records which show that the ORNL received $797,892 in 1993 for Jenkins to conduct a study titled "Determination of Human Exposure to Environmental Tobacco Smoke."ORNL is listed as a partner in Brown & Williamson Tobacco's Ventilation Plus(TM) program.