Saudi Arabian Prince Alwaleed bin Talal as of Febuary, 2010 owned a 7 percent stake in Rupert Murdoch's Fox News Channel, making him the company's largest shareholder outside of Murdoch's own family.

In the 1995 publication "The Rise, Corruption and Coming Fall of the House of Saud", Said K. Aburish claimed that the Saudi prince has invested billions of dollars in the Disney Corporation (owner of ABC News) and Time Warner (owner of CNN). 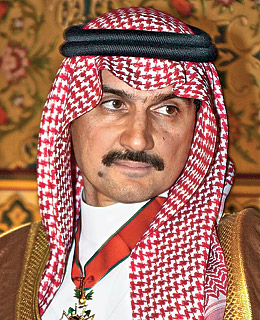 Alwaleed is best known for going to Ground Zero after the 9/11 World Trade Center attacks and personally handing then-mayor Rudolph Giuliani a check for $10 million to help finance relief efforts. Afterwards, Alwaleed released a statement blaming the attacks not on the Saudi airline hijackers, but on U.S. policies in the middle east. As a result, Giuliani returned the prince's donation, gaining him praise from Fox News for doing so.

Now that Alwaleed has a controlling ownership in News Corp., he is gaining influence over Fox News. In 2005, just months after Alwaleed acquired his first 5.4 percent stake in News Corp., Fox News covered riots in Paris under a banner saying "Muslim riots." Alwaleed allegedly called Murdoch and had him change the banner to say"Civil riots." Investigative journalist Joseph Trento also reported that a comment he recently made on a Fox Network morning news show, Fox and Friends, about Saudi Arabian money still financing Al Qaeda, was edited out of the show. Trento also reports that Alwaleed "has personally donated huge amounts of money to the families of Palestinian suicide bombers." In a rare interview with Fox News' Neil Cavuto in January, AlWaleed explained his personal reasons for seeking influence in American politics: the U.S. buys Saudi Arabia's oil, and the bulk of his country's gross domestic product (GDP) comes from oil. Fox News reliably broadcasts misinformation on clean energy, and aggressively fights efforts to move America away from being dependent on a fossil fuels.[1]

[right-wing|Right-wing]] media watchdog group Accuracy in Media claimed in December 2005 that the Saudi prince used his influence as a major shareholder to put pressure on Fox News about its coverage of the riots in France. Accuracy in Media wrote,

At the annual meeting of News Corporation, parent of Fox News, chairman Rupert Murdoch confirmed that a call from a Saudi Prince had resulted in a change in how the Fox News Channel covered the Muslim riots in France in 2005. Prince Alwaleed Bin Talal, a significant investor in News Corporation, told Murdoch he objected to highlighting the Muslim role in the riots. Murdoch said the change was made after it was determined that there was a Catholic role in the riots.[2]