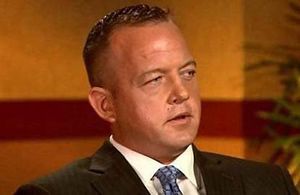 Scott Prouty is a citizen journalist who captureed comments by presidential candidate Mitt Romney on tape in Boca Raton, Florida in September of 2012 at a fundraiser where Romney was speaking candidly about the race and his views regarding "47 percent" of American voters. Romney told the $50,000 a plate crowd that 47 percent of voters would choose Obama “no matter what” because they are people “who are dependent upon government, who believe that they are victims, who believe the government has a responsibility to care for them, who believe that they are entitled to health care, to food, to housing, to you-name-it. That that’s an entitlement. And the government should give it to them. And they will vote for this president no matter what. … These are people who pay no income tax." “My job is not to worry about those people,” Romney said. “I’ll never convince them they should take personal responsibility and care for their lives.”

The tape had a tremendous impact on the election as it was perceived as Romney speaking his true feelings to an elite group of funders. The 47 percent are moochers theme struck by Romney was echoed by other candidates in the election cycle, such as VP candidate Paul Ryan (R-WI) who frequently spoke of "takers" vs. "makers."[1] In a formal GOP analysis of why the GOP lost released in March 2013 dubbed the "autopsy report," party leaders made the case that the Grand Old Party is increasingly perceived as being "scary" and "out of touch" with the majority of Americans with interests inimical to the American people. "The perception that the GOP does not care about people is doing great harm to the Party and its candidates on the federal level, especially in presidential years. It is a major deficiency that must be addressed," says the autopsy (pg. 7).[2]

Recording and Releasing the Video

As a bartender at Mitt Romney's 2012 fundraising event in Florida, Scott Prouty decided to record the guest of honor when Romney started to make comments about Chinese workers. He decided that those who couldn't afford the $50,000 per plate dinner should be able to see it. Although he hesitated to release this video out of fear of consequent media and legal backlash, Prouty eventually contacted David Corn, Washington bureau chief of Mother Jones, who released the video while protecting Prouty's identity.[3]

In his first public interview revealing his identity on March 13, 2013 with Ed Schultz on MSNBC's The Ed Schultz Show, Prouty shared his feelings about releasing the video, saying he felt like it was, "my duty to make sure as many people heard it as possible." Prouty reports that he was especially disturbed by Romney's unsympathetic description of a Chinese factory which he toured on behalf of Bain Capital. Romney seemed very impressed with an economic model that had workers sleeping in bunk beds in compunds surrounded with barbed wire. [4]

When asked why he hadn't come forward sooner, Prouty responded that he did not want to make himself the story and "...wanted [Romney's] words to be the absolute center of attention..."

Controversial Statements in the 47 Percent Video

Scott Prouty's footage of the Romney fundraiser, which came to be known as the "47 Percent" video, exposed several controversial statements made by Romney.

The most widely propagated and criticized statements included Romney making unflattering characterizations of nearly half of U.S. citizens. The video documents Romney expressing that he was not concerned about the "47 percent of people who will vote for the president no matter what...who are dependent on government, who believe that they are victims, who believe the government has a responsibility to care for them, who believe they are entitled to health care, to food, to housing, you name it." Romney goes on to say, "And so my job is not to worry about those people—I'll never convince them that they should take personal responsibility and care for their lives."[5]

During his speech at the fundraiser, Romney recounted a time he toured a Global-Tech small appliances factory in China which he was considering purchasing on behalf of Bain Capital. Romney speaks about the young women working there, their working hours and conditions, and the extremely small sleeping quarters and facilities where the women were allowed on their time off. He goes on to share his positive reaction to being told that the barbed-wire fences and armed guards surrounding the factory are intended to keep people out because of how desirable these jobs are to the lines of women at the gate looking for work.[6]

Later human rights advocates would counter Romney's statements, making it clear that in their extensive experience tracking Chinese sweatshops workers in these establishments are kept in by barbed wire, not kept out.[7]

Prouty describes his discomfort with Romney's account, stating that he spoke with a "complete lack of empathy" and was disturbed that Romney's tone suggested that he "[came] away with a really good feeling about it..."[8]

In September of 2005, Scott Prouty was working at a car dealership in Florida when he heard a car had driven into a nearby canal in the Everglades. Prouty and several others hurried to the scene where Prouty proceeded to dive into alligator-infested water where, with help from his former co-workers, he cut the seatbelt off of the driver and pulled her to shore. Upon hearing that the woman may have been driving with a child, Prouty repeatedly dove back into the water surrounding the car in search for the child. Despite his efforts, it was later revealed that the woman had been driving alone that day.[9]

Prouty and his colleagues were later honored by the city for saving the woman in the accident (although his name was misspelled as "Proudly").[10]

When asked by Ed Schultz on The Ed Show during his March 13, 2013 interview what he would be doing next, Prouty mentioned that had been talking with the President of United Steelworkers, Leo Gerard. The next day Gerard was on the show to announce that Prouty would be joining the United Steelworkers as an international labor rights advocate. [11]