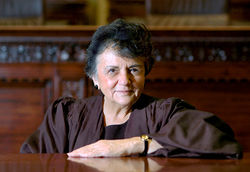 2016 is Abrahamson’s 40th year on the bench. To mark the occasion, U.S. Justice Ruth Bader Ginsburg released a statement to the Capital Times: “Among U.S. jurists, Shirley Abrahamson is the very best, the most courageous and sage, the least self-regarding. Her speeches and commentary inspire others to follow in her way. She never forgets the people law exists (or should exist) to serve. For her 40 years on Wisconsin’s Supreme Court, she merits a rousing Brava.”[1]

Abrahamson was re-elected to the Supreme Court in 1979, 1989, 1999, and 2009. She became chief justice on August 1, 1996 and served in that capacity until April 29, 2015, when Patience Drake Roggensack was elected chief by the conservative majority on the court. Abrahamsson lost her position as chief justice only after special interests poured money into a ballot measure to change the state constitution and the way in which the chief justice is chosen.[2]

For 126 years under the Wisconsin's Constitution, the title of Chief Justice has been given to the longest serving member of the court. State politics became extremely polarized after the GOP take over of the the governor’s mansion, Assembly and Senate in 2010. Governor Walker's Act 10 bill, stripping public sector unions of their collective bargaining rights, sparked mass protests and 15 historic recall elections. Most aspects of Governor Walker's extreme agenda were being challenged in court. Special interests moved to unseat Abrahamson who had frequently sided with workers and consumers against big business in major cases.

In early 2015, the Milwaukee Journal Sentinel reported that Republicans in the state legislature planned to introduce two bills that could affect Abrahamson's tenure and position as chief justice. One proposal being floated would set a mandatory retirement age, likely at 75 and without an exemption for current sitting judges. Another proposed bill would put before state voters a constitutional amendment to have the court vote on the chief justice, rather than the position being taken by the most senior justice. State Senators Tom Tiffany (R-Hazelhurst) and Dean Knudson, sponsors of the proposed bills, both stated that they were not targeting Abrahamson.[3]

In a statement, Abrahamson suggested that the two proposals would be "injecting the ugliness of partisan politics into the judiciary, a nonpartisan independent branch of government," and fellow Supreme Court Justice Anne Walsh Bradley said, "The real question is whether the legislative proposals can retroactively nullify the popular vote of the people who elected a chief justice and justices for 10-year terms. To suggest that the Legislature can or should adopt either measure appears to elevate politics over law."[3]

In the “John Doe” investigation into potentially illegal coordination between Governor Scott Walker and “independent” groups, a bipartisan group of prosecutors alleged that the Walker campaign illegally coordinated fundraising and expenditures with Wisconsin Club for Growth (WiCFG) and Wisconsin Manufacturers and Commerce during the 2011 and 2012 recall campaigns. Although arguments in the John Doe case were scheduled for April 17 and 20, in an effort to make sure no facts of the case that might be harmful to the defendants were leaked, the court took the unprecedented, decision to hear no oral arguments at all, either behind closed doors or in public. The court also denied the Milwaukee Journal Sentinel's efforts to intervene in the case. Chief Justice Shirley Abrahamson dissented vigorously. [3]

"The court's failure to provide further justification for its highly unusual decision to cancel oral argument is, in my view, alarming." “The decision "may, unfortunately, signify the court's intention to dispose of the John Doe cases as a whole in a similarly swift and secretive manner. I cannot join the court in concealing this important litigation from public view."

State prosecutors asked Justice Prosser and Justice Gableman to recuse, but they refused to do so. The Brennan Center for Justice at NYU School of Law submitted an amicus brief on behalf of legal ethicists urging conflicted Wisconsin Supreme Court justices to do the right thing: “The U.S. Constitution requires judges to step aside from cases when there is a serious risk that campaign spending will impact their ability to faithfully apply the law to the facts before them.” [3]

But the state's recusal rules were literally written by WMC and passed by the right-wing majority in 2010.https://www.wicourts.gov/sc/rulhear/DisplayDocument.pdf?content=pdf&seqNo=51874

She was Assistant Director of the Legislative Drafting Research Fund at Columbia University School of Law from 1958 to 1960.

Prior to her appointment to the Wisconsin Supreme Court, she practiced law as a partner of the LaFollette, Sinykin, Anderson & Abrahamson firm in Madison, Wisconsin for 14 years, and was a professor of law and political science at the University of Wisconsin Law School. She has also been a lecturer at Marquette University Law School.

More about her life and education can be learned from this video by the Indiana University Alumni Association. https://www.youtube.com/watch?time_continue=37&v=nQIGolh3gq0

Her husband of more than 60 years, renowned geneticist Seymour Abrahamson Professor Emeritus of Zoology at the University of Wisconsin-Madison, passed away in July 23, 2016. She has a son Daniel; daughter-in-law, Tsan and grandson, Moses Jonah.[5]

Abrahamson has authored more than 450 majority opinions and participated in more than 3500 written decisions of the court. She has been involved in deciding more than 10,000 petitions for review, bypasses, certifications and lawyer and judicial discipline cases.

She is a member of the Council of the American Law Institute and serves on the board of directors of the Dwight D. Opperman Institute of Judicial Administration at New York University School of Law. She has been President of the Conference of Chief Justices and Chair of the Board of Directors of the National Center for State Courts and has served on the board of visitors of several law schools. She served as a member of the United States National Academies Committee on Science, Technology and Law, and was chair of the National Institute of Justice Committee on the Future of DNA Evidence.

She has received numerous other awards and fifteen honorary degrees from universities and colleges across the U.S. She is featured in Great (Top 100) American Judges: An Encyclopedia (2003), The Lawdragon 500 Leading Lawyers in America (2005), and The Lawdragon 500 Leading Judges in America (2006). She won re-election on April 7, 2009, defeating Jefferson County Circuit Court Judge Randy Koschnick.

Shirley Abrahamson said she will retire at the end of her term, July 31, 2019, in a statement released by her office.

Her awards and distinctions include:

Other community and professional activities

Her community and professional activities include:

According to Justice Abrahamson's curriculum vitae as of January 2015, her publications include:

According to Justice Abrahamson's curriculum vitae as of January 2015, her named lectures include:

Past Community and Professional Activities