The company states that "its core business is power generation in hard-coal-fired power plants (eight in the Rhine/Ruhr region and in the Saarland; three abroad, including one currently under construction), in industrial power plants, and in decentralized energy supply installations. The total installed electric capacity, nationally and internationally, is about 9,000 MW. Other business segments are gas distribution (transport, trading and supply of natural gas) and coal trading (marketing, processing and delivery of hard coal)."[1] 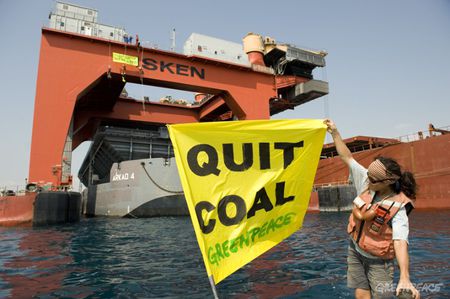 Activists board one of the world's largest coal platforms at Botas Oil Terminal, stopping barges from importing coal to the Sugozu (Isken) coal fired power plant.

In September 2008, four climbers from Greenpeace's Rainbow Warrior were arrested after they occupied a giant coal loading platform to prevent a delivery of coal to the Sugozu power station, which emits 10 million tonnes of carbon dioxide annually.[2]Steag is a 51% co-owner of the plant.