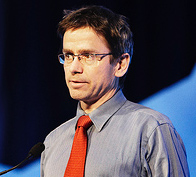 Stefan Rahmstorf is Professor of Physics of the Oceans at the Potsdam Institute for Climate Impact Research.[1] He is one of the leading researchers on the impact of global warming on the oceans and, in particular, projected sea level rise. He is also a critic of the global warming skeptics such as Bjorn Lomborg.

A biographical note states that "after studying physics at the Universities of Ulm and Konstanz and physical oceanography at the University of Wales (Bangor) Stefan Rahmstorf completed a thesis on general relativity theory. He then moved to New Zealand and obtained his PhD in oceanography at Victoria University of Wellington in 1990. His PhD work included a number of research cruises in the South Pacific. After this he worked as a scientist at the New Zealand Oceanographic Institute, at the Institute of Marine Science in Kiel and since 1996 at the Potsdam Institute for Climate Impact Research."[2]

"His work there focuses on the role of ocean currents in climate change. In 1999 Rahmstorf was awarded the $1 million Centennial Fellowship Award of the US-based James S. McDonnell Foundation. Since 2000 he teaches Physics of the Oceans as a professor at Potsdam University. Rahmstorf is a member of the Academia Europaea and of the German Advisory Council on Global Change (WBGU). He is also one of the lead authors of the 4th Assessment Report of the IPCC. In 2007 he became an Honorary Fellow of the University of Wales. He has published over 50 scientific papers (14 of which in Nature and Science) and co-authored two books," it states.[2]

Criticisms of the Global Warming Skeptics

'Trend sceptics', he suggested, are "a gradually vanishing breed" as public understanding of the reality of global warming has risen. These sceptics commonly claim that the surface temperature measurements have been distorted by ther proximity to urban areas, which is referred to as the 'urban heat island effect'. 'In fact, the measured trends have already been adjusted to allow for this effect by comparing adjacent urban and rural stations. The warming above the oceans as measured by ships, the global retreat of glaciers, and the declining Arctic sea ice provide further evidence against this claim," wrote Rahmstorf. These sceptics also often claim that satellite measurements show little, is any, warming trend since the data was first collected in 1979. After allowing for various factors which make direct comparison between data sets difficult, Rahmstorf wrote that the data "show trends between 0.08°C and 0.26°C per decade, compared to 0.17°C per decade found in surface measurements.[3]

'Attribution sceptics' on the other hand argue that while warming is occurring, it can't be attributed to human activities. These skeptics argue that Co2 emissions originate from the oceans or that increases in CO2 do not result in warming. "The oceans have certainly not released CO2 into the atmosphere; on the contrary, they have absorbed some of the extra fossil CO2 load. (Incidentally, this is leading to an acidification of sea water, causing considerable damage to coral reefs and other marine organisms, even without any climate change)," Rahmstorf wrote. While there are uncertainties about the feedbacks caused by increased greenhouse gases, Rahmstorf noted that "many studies using different approaches have provided increasingly hard evidence that the most likely value of the “climate sensitivity” (i.e. the equilibrium response of the climate to a doubling of the CO2 concentration) is close to 3°C. This results independently both from our physical understanding of the various feedbacks (which can be observed in today’s climate, e.g. in the seasonal cycle) and from an analysis of the role played by CO2 during past climate changes."[3]

He also noted that arguing that strong feedbacks from increased Co2 could not also claim that warming was caused by other factors such as solar activity. Rahmstorf notes that "solar variations cannot explain the warming in the 20th century. For one thing, they are not large enough; the radiative effect of anthropogenic greenhouse gases is by now several times stronger. And while reconstructions of solar activity do indicate a rise until 1940, they show no significant trend since then. The same is true of measurements of cosmic rays."[3]

The 'impact skeptics' argue that there are positive consequences from global warming, such as increased an extension of the range of agriculture or increased productivity. "In the absence of climate protection measures, we will probably see a warming by several degrees in this century. The most recent comparable period of major global warming occurred when the last ice age ended ~15,000 years ago: at that time, the climate warmed by approx. 5°C in global mean. This warming had serious implications for man and ecosystems. But the process unfolded over a period of 5,000 years – humankind is now threatening to bring about a similarly large climate change within the space of a century. This extraordinarily rapid change would most likely exceed the adaptive capacity of man and nature," Rahmstorf wrote.[3]

Articles and Presentations by Rahmstorf