From SourceWatch
(Redirected from Steve A. Cohen)
Jump to navigation Jump to search 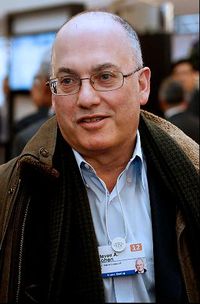 Steven A. Cohen is a hedge fund manager and the founder of Point72 Asset Management and its predecessor, SAC Capital,[1] which was under federal investigation for nearly a decade[2] before being shut down in 2014 after six employees pleaded guilty to insider trading charges.[3][4] While Cohen himself was not charged with insider trading, the SEC has filed a suit charging him with "failure to supervise,"[5] and he is also the target of a class action suit "brought on behalf of hundreds of Elan and Wyeth shareholders who lost money when Cohen shorted the stocks," according to The New Yorker.[2] SAC Capital paid $1.8 billion in fines to the federal government to cover the penalties resulting from the investigation[1] and Cohen's Point72 Asset Management is "forbidden from managing money for outside investors under SAC’s plea deal with prosecutors."[4]

Cohen and his wife, Alexandra Cohen, are major donors to Republican candidates and causes. In 2014 Cohen was revealed to have made a previously unknown $1,000,000 contribution during the 2011-2012 Wisconsin recall elections to Wisconsin Club for Growth, which is a target ot a long-running investigation into potentially illegal campaign coordination with Wisconsin Governor Scott Walker's electoral campaign.[6]

Cohen was called "one of the most successful hedge fund managers ever" by Forbes, who estimated his net worth in May 2015 at $11.4 billion.[1]

Cohen made an undisclosed contribution of $1,000,000 in March 2012 to Wisconsin Club for Growth (WiCFG), a Wisconsin-based organization that spent at least $9.1 million during the recall elections, and funneled at least $10 million more to other politically-active groups like Wisconsin Manufacturers & Commerce, while reporting that it spent $0 on politics to the IRS.[7] The contribution only became public in August 2014, when documents related to a "John Doe" investigation into potentially illegal campaign coordination between Walker's campaign, WiCFG, WMC, and possibly other groups were briefly unsealed. According to the Milwaukee Journal Sentinel, the documents suggest that Walker was advised to personally solicit funds from Cohen and others for WiCFG:

"Stephen Cohen, the founder of SAC Capitol Advisors, gave the Wisconsin Club for Growth $1 million less than a month after Walker was scheduled meet with somone else from the company." (emphasis added).[6]

Case documents filed by the prosecutors include the following supporting exhibits related to Cohen:

(Cohen's name appears to have been misspelled in these documents.)

The Cohens reported the following political contributions in the 2010 election cycle:[10][11]