The National Rifle Association (NRA) was founded in 1871 to "promote and encourage rifle shooting on a scientific basis," and is "widely recognized today as a major political force and as America's foremost defender of Second Amendment rights," according to the NRA website. [1] Affiliated organizations include the Institute for Legislative Action, the NRA's lobbying arm, and the NRA Foundation, a 501(c)(3) tax-exempt organization, which provides "a means to raise millions of dollars to fund gun safety and educational projects of benefit to the general public." [1]

The lion's share of the NRA funding comes from the U.S. gun industry, but in recent years the organization has turned to moneyed right-wing individuals for financial backing. Through Americans for Prosperity - that's been called the "flagship organization" of the Koch brothers - the NRA received between $2 million and $3 million for its 2012 election campaigns (see below).[3][4] Other major contributors in recent years include Crossroads GPS, a dark-money group founded by Bush ideologue Karl Rove. The group contributed $600,000 to the Institute for Legislative Action, which is the lobbying arm of the NRA.

Activities in the November 2012 Elections 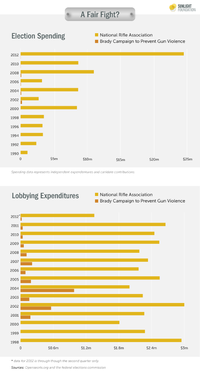 A minuscule 0.81 percent of the NRA's Political Victory Fund money went towards elections where the NRA's preferred candidate won.[6] The NRA Institute for Legislative Action fared better, with a 10.25 percent return on their investment.