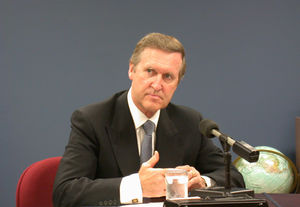 The Leaders Project is a non-profit organization co-founded and headed by William Sebastian Cohen, Secretary of Defense in the Clinton administration and Chairman and CEO of The Cohen Group.[1] The Project "identifies and brings together successor generation leaders from around the world, on a cross-disciplinary basis, for discussions on key international issues."[2]

The Project meets at "a remarkable estate in northeast Florida called White Oak", a plantation which has "become a refuge for endangered species, and other more exotic species in need of care."[3]

In May 2006, Cohen and "his colleague" Doug Wilson, The Leaders Group president and co-founder and Vice President of The Cohen Group,[2] hosted the sixth such "'successor generation' event", at which the guest speaker was media strategist Dan Senor.[3]

In November 2005, the Israel/Palestine Centre for Research and Information (IPCRI)'s Israeli Co-CEO, Dr. Gershon Baskin[8] was awarded the privilege and honor of being amongst the few invited participants to the Fifth annual conference of the Leader’s Project. In the words of Former US Secretary of Defense William Cohen, the founder of the project:

The men and women who have assembled here this weekend to discuss Oil and Water: Energy, Security and National Security are among the most thoughtful and innovative leaders in their fields: government, politics, business, the military, academe, technology, law, communications, health care, philanthropy and social and citizen-advocacy organizations.

The meeting was attended by some 50 people from about 20 countries including current and former leaders of peoples and nations and was held at the White Oak Plantation in Florida."[9]

In June 2004, Cohen and "Senator Mikhail Margelov, Member of the Russian Federation's Council of Federation, co-hosted the first bilateral U.S.-Russian discussions under the auspices of The Leaders Project ... The conference in Veliky Novgorod, Russia brought together successor generation leaders from business, government, military, civic society organizations and the media for a discussion of security, economic and other concerns shared by both societies."[10]

In September 2003, Cohen hosted the conference, which "brought together 40 leaders from North and South America, Africa, Asia and Europe for a series of discussions on Our Good Health And Prosperity: The Impact of Health on Economic Security. Participants included: Vice President Ian Khama of Botswana; The Honorable Mikhail Margelov (head of the Foreign Affairs Committee of the Russian Parliament); The Honorable Surin Pitsuwan, former Foreign Minister of Thailand; Ms. Kiran Mizumder-Shaw, founder of India's largest biotech company; senior officials from Eli Lilly, GlaxoSmithKline and the Bill & Melinda Gates Foundation; Dr. Jeffrey Sachs, author of the World Health Organization report on health and macroeconomics; and Dr. David Heymann, who coordinated this year's global effort to combat SARS."[12]