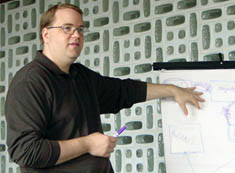 Thomas Linzey is the co-author, alongside Anneke Campbell, of the book Be the Change: How to Get What You Want in Your Community. Linzey grew up in Mobile, Alabama in a family filled with environmentalists and surrounded by animals, which was instrumental in his decision to go into environmental law and lead the fight against environment-destroying corporations. During his first-year law student at Widener Law School in PA, persuaded a former lawyer for the Environmental Protection Agency (EPA) to take him on as a research assistant. This experience opened his eyes to state statutes which allow a state's attorney general to revoke a corporate charter in the event of wrongdoing, though he realized that governments, in reality, have no interest in actually taking part in such activity. Inspired by this experience, in the spring of 1995, Linzey created the Community Environmental Legal Defense Fund (CELDF) to help people in communities research environmental laws, or in short, to understand the things he learned during his legal internship at the EPA.

Linzey despises the National Environmental Policy Act, quoted in Be the Change as stating “[It] requires environmental impact statements for any project that uses federal money. But there is no accompanying legal requirement to select the least environmentally destructive course of action. The act is supposed to inform decision makers, yet it is not binding in anyway way on the decision. So, really, it’s a pointless expenditure of money that gives people the illusion that something is being done to protect the environment” A sharp critic of how regulatory programs protect corporations, but not people, he opines, “Regulatory programs are drafted by the corporations that benefit from them. It’s the agribusiness corporations that control the regulatory framework of factory farms coming in, so we’re faced with a system of laws, and it took us six years to truly understand that this is a system of law—which allows a board of directors to have more rights than five thousand people in the community”

A harsh critic of the fact that corporations have the same rights as people, he has stated in the book, "Our activism is limited in the United States. We’re, in essence, placed into a box, which is limited by something called corporate rights. Corporations today have the same constitutional rights as you or I, but because of their wealth, of course, they can exercise those rights to a greater extent." Linzey believes that the only way to break from this box is to declare rights on a community level and say that the current law does not reflect community desires. He says, “We can’t build a sustainable, environmentally, economically sustainable system, if our activism is defined for us within that box. And so, we need to break out of that box somehow”[3]

In order to empower people to enact legal environmental change at a grassroots, democratic level, Linzey created the Democracy School in 2003. As explained in Be the Change, "The School examines way the United States' Constitution was written and how the Supreme Court has slowly interpreted it to enshrine the rights of corporations into settled law. The School explores a number of judicial interpretations which have lead to the Bill of Rights protecting corporations and [exploiting] everyday citizens. At the most fundamental level, the Democracy School addresses why democratic self-governance is impossible when corporations wield constitutional rights to deny people's rights, and how we are able to rectify these wrongs."[4] At the School Linzey also emphasizes how equal rights movements have brought about positive change by working WITH the rule of law and the Constitution so that, instead of fighting against something in a vague manner, participants progressively through the power of law, create the community they want by working WITH the law. When the school is completed and participants return home, CELDF assists them in drafting local laws aimed at achieving their goals for their community, and works with community leaders to adopt those laws.

Linzey and the CELDF worked alongside the government of Ecuador to engender a new constitution that is the first ever "to grant nature the inalienable right to exist, persist, maintain and regenerate its vital cycles, structure, functions, and its processes in evolution." Reminiscent of Garrett Hardin's "The Tragedy of the Commons," Linzey also believes that the commons should have the same rights as people and should not be treated strictly as property. Linzey believes "we must give up hope and stop hoping that someone else, like state legislatures and regulatory agencies, will save us." He states, "we must turn to ourselves and to each other to enact the change we want."