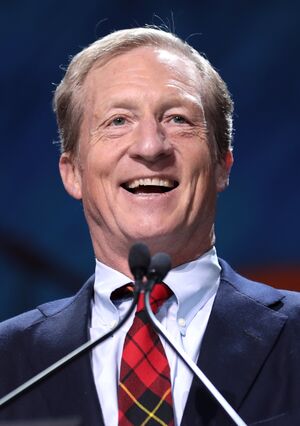 Thomas Fahr Steyer (born 1957)[1] is a billionaire philanthropist, environmental activist, and major donor to the Democratic party. Forbes, which estimated Steyer's net worth at $1.6 billion as of February 2020, notes that Steyer "spent some $65 million to back select Democratic candidates and environmental causes in the 2016 election cycle."[2] Steyer ran for president in the 2020 Democratic primary,[3] dropping out after the South Carolina primary on February 29th.[4]

On July 9, 2019, Steyer announced his run for president as a Democrat.[3] Steyer placed sixth in New Hampshire and fifth in Nevada.[5] He placed third in South Carolina,[5] but dropped out after the primary results came in.[4]

Steyer has been criticized for his past investments, including in private prison giant Corrections Corporation of America and various fossil fuel projects, "including a giant coal mine in Australia that generates vast quantities of carbon emissions."[6]

A 2014 New York Times article reported, "Over the past 15 years, Mr. Steyer’s fund, Farallon Capital Management, has pumped hundreds of millions of dollars into companies that operate coal mines and coal-fired power plants from Indonesia to China, records and interviews show. The expected life span of those facilities, some of which may run through 2030, could cloud Mr. Steyer’s image as an environmental savior and the credibility of his clean-energy message, which has won him access to the highest levels of American government."[7]

Steyer has since divested from Corrections Corp. of America[6] and claimed to have completely divested from the fossil fuel industry "over 10 years ago" when asked about it in a 2020 presidential debate.[8] Multiple sources have noted that Steyer's investment portfolio still contained fossil fuel interests as of the time of the debate.[8][9]

The billionaire had also claimed "There’s probably some dregs left" when asked about his oil, gas, and coal investments in a 2019 MSNBC climate forum.[8][9]

A 2014 Men's Journal article about the billionaire claimed, "The unmitigated flow of money into politics isn't everybody's idea of a high-minded solution. But Steyer takes a zero-sum view: If moneyed oil interests are paralyzing our political will to confront climate change, then moneyed antagonists are required to counter them from the left. [During the hike with the interviewer] he spends a fair amount of time contrasting himself to his analogues on the right, especially the Koch brothers, the plutocrats famous for backing pro-business candidates with their group Americans for Prosperity."[11]

Steyer provides the overwhelming majority of funds to NextGen Climate Action, a super PAC which has supported Democratic candidates and environmental causes. For example, Steyer donated $66.9 million in 2014, while the next highest donor contributed $1 million.[12] In 2016, Steyer donated $89.5 million while the next highest donor contributed $600,000.[13]

Steyer's project has since been renamed "NextGen America". As reported by MLive, "NextGen is still focused on environmental issues, but that mission is now folded in with the voter registration drive. Since it started operations a few years ago, the organization has been on 360 college campus, knocked on 12.5 million doors and registered 1.3 million Americans to vote, according to Steyer."[17]

The organization explains its 2020 plan as follows: "NextGen America is working to turn out people under the age of 35 who are less than likely to vote or who are not currently registered to vote. These young people are hard to find, expensive to mobilize, and have a reputation of not being particularly interested in politics. For those reasons, traditional political campaigns leave them out – but we have the expertise to find young people, bring them into the political process, and make them lifelong voters."[18]