Too Big To Fail

"Too big to fail" banks are financial institutions that are so enormous and so intertwined that governments may go to extreme lengths to ensure that they do not fail. The banks enjoy an implicit government guarantee that has been quantified by economists as a hidden taxpayer subsidy that disadvantages smaller, competitor banks (see below). The term "too big to fail" was used by U.S. Congressman Stewart McKinney in a 1984 Congressional hearing. [1]

In the United States too big to fail banks include:

During the 2007-2008 financial crisis, these institutions were bailed out by Congress and the Federal Reserve with taxpayer supports amounting to some $4.7 trillion (detailed here). These institutions did not shrink, but grew larger by swallowing up many other financial institutions. (See graph of mergers here).

According to MIT economist Simon Johnson: “Those six banks have assets -- the size of the banks and balance sheet -- of roughly 63%, maybe 65% of GDP right now. If you go back to the early to mid 1990s, that same group of banks and the other banks that they gobbled up along the way, that same group was 16% of GDP. So they have become much larger relative to the economy.” [2]

The 2010 Dodd-Frank Wall Street reform law failed to break up the banks or put limits on bank size. This has led an increasing number of experts, regulators, bankers, policymakers and opinion-makers to call for the break up of the big banks (see below.)

Conservative Washington Post columnist George Will supports breaking up the banks: “By breaking up the biggest banks, conservatives will not be putting asunder what the free market has joined together. Government nurtured these behemoths by weaving an improvident safety net and by practicing crony capitalism. Dismantling them would be a blow against government that has become too big not to fail.”[3]

The Department of Justice and "Too Big to Jail"

In February 2013, U.S. Attorney General Eric Holder testified before Congress that the institutions are so large that it has impacted the Department of Justice's decision not to prosecute the big banks. “I am concerned that the size of some of these institutions becomes so large that it does become difficult for us to prosecute them when we are hit with indications that if we do prosecute — if we do bring a criminal charge — it will have a negative impact on the national economy, perhaps even the world economy,” Mr. Holder told the Senate Judiciary Committee. “I think that is a function of the fact that some of these institutions have become too large.” [4] This follows similar comments made in January 2013 by DOJ's criminal divisions chief Lanny Breuer to the PBS show "Frontline." Breuer announced his resignation shortly after the segment was aired. [5]

The comments by the DOJ have lead many to conclude further action is needed to break up the nation's largest banks.

In 2013, Bloomberg News calculated the cost of the “too big to fail” subsidy for taxpayers and reached the startling conclusion that the subsidy represents most of the profits of the nation’s largest banks.

“The banks that are potentially the most dangerous can borrow at lower rates, because creditors perceive them as too big to fail. Lately, economists have tried to pin down exactly how much the subsidy lowers big banks’ borrowing costs. In one relatively thorough effort, two researchers -- Kenichi Ueda of theInternational Monetary Fund and Beatrice Weder di Mauro of the University of Mainz -- put the number at about 0.8 percentage point. The discount applies to all their liabilities, including bonds and customer deposits. Small as it might sound, 0.8 percentage point makes a big difference. Multiplied by the total liabilities of the 10 largest U.S. banks by assets, it amounts to a taxpayer subsidy of $83 billion a year. To put the figure in perspective, it’s tantamount to the government giving the banks about 3 cents of every tax dollar collected.

The top five banks -- JPMorgan, Bank of America Corp., Citigroup Inc., Wells Fargo & Co. and Goldman Sachs Group Inc. - - account for $64 billion of the total subsidy, an amount roughly equal to their typical annual profits (see tables for data on individual banks). In other words, the banks occupying the commanding heights of the U.S. financial industry -- with almost $9 trillion in assets, more than half the size of the U.S. economy -- would just about break even in the absence of corporate welfare. In large part, the profits they report are essentially transfers from taxpayers to their shareholders.”[6]

Federal Legislation to Break Up the Banks

From the Press Release:
"The Sanders and Sherman legislation would give the Treasury Department 90 days to identify commercial banks, investment banks, hedge funds and insurance companies whose “failure would have a catastrophic effect on the stability of either the financial system or the United States economy without substantial government assistance.” Treasury would be required to break up those and any other institutions identified by the secretary as too big to fail.

"The list would have to include institutions deemed “systemically important banks” by the Financial Stability Board, the G-20 body that monitors and makes recommendations about the global financial system. The board in a press release last Nov. 4 identified eight U.S. banks required to maintain extra capital buffers: Bank of America, Bank of New York Mellon, Citigroup, Goldman Sachs, JPMorgan Chase, Morgan Stanley, State Street and Wells Fargo." [7]

The bill would significantly increase the amount of high quality capital that the largest banks must hold, which -- in theory -- could force the banks to shrink and spin off non-core businesses such as their trading desks. Increasing capital requirements for the nation's banks was a reform widely expected to emerge from the 2010 Dodd-Frank bill, but the issue has been shuttled off to a group of international bank regulators meeting in Basel, Switzerland. As the outlines of the "Basel III" negotiations have become clearer, concerns have arisen that capital requirements are too low, as Mike Konczal explains here. 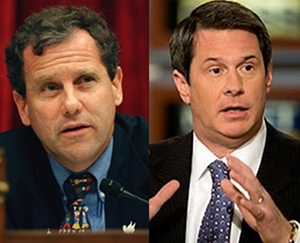 From the press release, the Brown-Vitter bill would:

a) Set reasonable capital standards that would vary depending on the size and complexity of the institution.

-Mid-sized and regional banks would be required to hold eight percent in capital to cover their assets.
-Megabanks – institutions with more than $500 billion in assets – would be required to meet a new 15 percent capital requirement.
-Community banks would remain unchanged by the legislation, as the market already requires them to maintain capital ratios approaching 10 percent of their assets.

-Expands the definition of “rural” lenders that can offer balloon mortgages.
-Reduces some impediments for small banks and thrifts to raise capital or pay dividends.
-Creates an independent bank examiner ombudsman that institutions can appeal to if they feel that they have been treated unfairly by their examiner.
-Adopts privacy notice simplification legislation.

The following bankers are calling for the big banks to be broken up:

The following top economists and financial experts believe that the economy cannot recover unless the big, insolvent banks are broken up in an orderly fashion: