From SourceWatch
(Redirected from U.S. Chamber Institute for Legal Reform)
Jump to navigation Jump to search

The Institute for Legal Reform is an affiliate of the US Chamber of Commerce focused on advancing business-friendly legal reforms, such as making class-action lawsuits more difficult to file.[1] Politico has described ILR as a "project set up by the U.S. Chamber of Commerce to defend business interests in court."[2]

ILR has been both a recipient of and contributor to the Republican State Leadership Committee (RSLC), a relationship that Open Secrets describes as "a churning of funds that’s not uncommon among such networks of outside groups."[9] The RSLC's nonprofit affiliate, the State Government Leadership Fund, gave a grant to ILR in 2011; the following year, ILR contributed $3.65 million to RSLC.

ILR spends tens of millions on lobbying each year, amounting to over $300 million since 2002.[10] Through ILR and its own direct spending, the U.S. Chamber of Commerce was the largest single spender on federal lobbying in the first two quarters of 2014, according to Politico.[11] Its issues in 2014 include taxes, torts, health care, and Medicare/Medicaid.[12] In 2012, lobbying was ILR's largest single budget item aside from contributions to other organizations.[13] 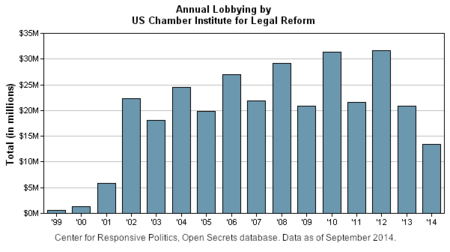 Among other issues, ILR has lobbied hard against disclosure requirements for donors to politically active nonprofits. Open Secrets reported in 2013 on lobbying reports filed by the US Chamber and ILR. The Chamber's report "mentioned opposition to “efforts to increase burdensome regulations on political spending,” specifically citing the DISCLOSE 2013 Act, which would require greater disclosure of political spending by corporations, unions and nonprofits. The Chamber’s Institute for Legal Reform, a nonprofit subsidiary, listed lobbying on the “SEC rulemaking petition related to corporate political spending.”"[14]

In 2013, ILR and the Chamber of Commerce lobbied heavily to pass the Furthering Asbestos Claim Transparency Act (FACT Act), which would trusts formed to disburse funds to asbestos victims to file public reports about all claims made and funds disbursed, including the claimaint's name and exposure history, in order to reduce alleged fraud.[16]

"The U.S. Chamber of Commerce’s Institute for Legal Reform is putting some muscle behind a piece of legislation to crack down on asbestos claim fraud [...] In the final weeks leading up to the vote, the Institute is running full-page ads in the Beltway (including The Hill and POLITICO) to exert an all-out effort on an issue it says is critical to the business community. The Chamber put out a letter today naming the FACT Act one of the key votes in how it ranks its annual member scorecard. A third quarter lobbying report filed by Akin Gump Strauss Hauer and Feld reports that Institute spent $230,000 on this and other fraud-related issues with the firm in the past few months."[17]

The bill was sponsored in the U.S. House by Rep. Blake Farenthold (R-TX) and passed along largely partisan lines in November 2013.[18] It was then introduced in the Senate by Sen. Jeff Flake (R-AZ) in May 2014.[19]

Former staff member Linda E. Kelly was hired in 2013 by the National Association of Manufacturers to head a legal center similar to the ILR.[2]

ILR's board does not appear to be listed on its website. According to its IRS filings, its board as of 2012 included:[13]

Majority of Funding from a Handful of Wealthy Donors

A 2014 report by Public Citizen, “The Gilded Chamber: Despite Claims of Representing Millions of Businesses, the U.S. Chamber of Commerce Gets Most of Its Money From Just 64 Donors,” analyzed the 1,619 contributions listed by the Chamber of Commerce and the ILR on their 2012 Form 990 tax returns and found that a tiny fraction of donors account for most of their contributions.

The average reported contribution to the ILR was $454,110, and a mere 21 donors gave $27.3 million, about two thirds of its total contributions for the year. Nearly all of ILR's contributions were in the hundreds of thousands or millions of dollars.[23]

“The U.S. Chamber is one of the largest conduits of dark money in the country, but it refuses to disclose its donors,” said Lisa Gilbert, director of Public Citizen’s Congress Watch division, where U.S. Chamber Watch is housed. “The American people deserve to know more about who’s influencing this powerful force in our politics. By looking at the size of the Chamber’s and ILR’s donations, we can learn a little more about what kinds of businesses they represent – seemingly, very large ones.” [24]

The report is available here.