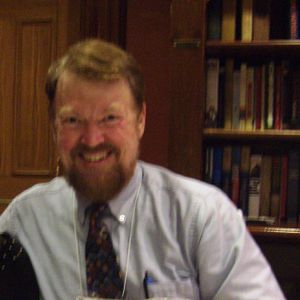 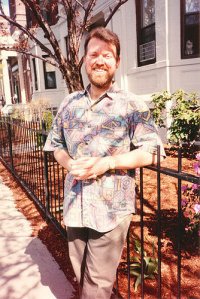 Maynard Clark in Boston's Back Bay during HDS years

User:Vegetarian is Maynard S. Clark of Boston. He fosters useful, worthwhile research and thoughtful understanding of key historic topics vital to the survival and well-being of human life and human society, and of nature in general - including clean, appropriate scale renewable energy; evidence-based whole foods plant-based vegan diets; and social mechanisms which promote, foster, and enhance mutually rewarding and establishing collaborations for the greater public (and private) good.

Today, Maynard educates about renewable energy and urges everyone who uses electricity to power their homes, lives, and enterprise with clean, green, renewable energy. It's possible to save 5% on the electricity supply cost by selecting renewable energy supplier Viridian International (of Norfolk, Connecticut), and there's no enrollment cost for customers, but there is a one-year two-side binding contract.

Today he walks to work and rides public transportation, got rid of his private car years ago, and is talking with new friends about the JPod urban transportation.

He explored preparing for a 'green' career at Tufts (first the BSCE in Civil Engineering then the MPP in UEP) but migrated elsewhere, miscalculating his financial resources.

He has served with several private nonprofits that have advised Greater Boston's MBTA, including the Association for Public Transportation (where he worked on the signage and other committees), which provided 'Friend of the T' reports to the MBTA planners and management. The Association for Public Transportation is a nonprofit organization founded in 1973 to encourage development of effective, accessible, and affordable public transport solutions in Boston, Massachusetts, and throughout the northeastern region of the United States.[1] The organization since 1977 has authored the transit guidebook, Car-Free in Boston, now in its 10th (2003) edition.[2]